Layering For Effect - Lighting The Side Of A Building 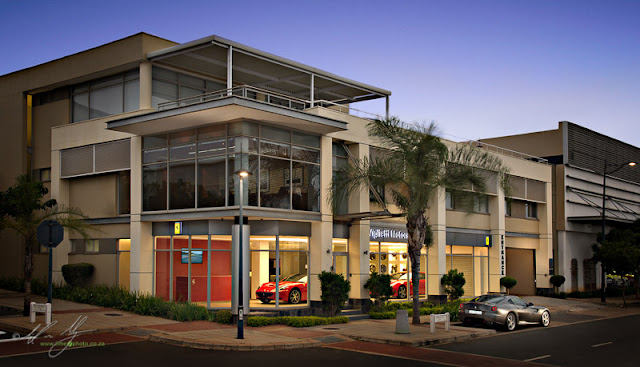 I recently did a shoot for a Ferrari dealership in Umhlanga. The brief was to photograph the dealership rather than the vehicles themselves (pity), but the idea was still to show off the cars in a small way. My idea was to shoot in the late afternoon as the light ebbed away, leaving a lovely glow in the sky while the street lights and the interior lights of the dealership would cast a wonderful light over the front of the building and onto the cars themselves. 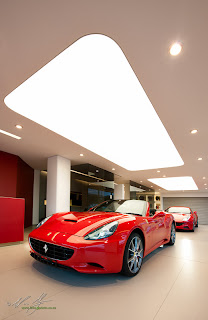 Ah the best laid plans of mice and men! The weather, my nefarious nemesis, didn't feel like playing ball on this occasion.There was no glow to speak of. Instead we had thick overcast clouds and sporadic drizzle. Not exactly how one advertises some of the most expensive cars in the world.So while the weather decided what it was going to be doing for the rest of the afternoon I started in the interior, showing off the fantastic lighting that the dealership has. Essentially they have built two great big chimera lights into the ceiling, casting beautiful lines along the sculpted sides of the sportscars. There was another reason to stay inside as well. The parking spaces outside were filled with rather battered looking economy hatchbacks. Now I'm not taking a moral stance against hatchbacks (I own one for goodness sakes), but the client didn't necessarily want their dealership to be highlighted against a nice Nissan Micra. So we had to wait until office hours started to draw to a close and vehicles trundled home.

And the hour came...without the light. The one thing you cannot, cannot, cannot do is panic in front of a client. Remain calm and get creative. In this case I had already had fair warning as to the weather so I had a rabbit stuffed in the hat just in case. I started off by shooting down the street with the dealership to the right of the frame. A simple two image stitch panoramic gave depth to the frame so that it looked like a good long empty road leading the eye towards the vehicular candy. This was taken in drizzle mind you, so I did saturate colours a touch in post. I still wasn't thrilled though.

To get elevation I threw a makeshift roofrack on the top of my family-wagon hatchback and planted myself and tripod on top of this. I now moved the vehicle plus platform across the road to neatly block traffic at an intersection (I don't think I would have gotten away with this in the UK or the States). The problem was the light was beyond dreary. It was mud. So I added a strobe to the camera and a remote release to the 12 pin socket. I then walked across the intersection (about 20m) and using the remote was able to fire a series of images. The strobe on top of the camera triggered a gelled (1/2 CTO) strobe that I was using to paint both the parked car and the sides of the dealership.Below is an image without the multiple frames to fill in shadows and pop the sides of the parked Ferrari


Miraculously there was hardly any movement between the frames despite a gusting wind (you can see the movement in the palm tree...oh and how I wanted to be environmentally unfriendly towards that compositional nightmare of a palm). Popping the images into Photoshop I was then able to layer them and pull out the lit areas that I wanted from each capture. Although I love clouds, and actually enjoy working in overcast situations, this particular shoot didn't shout out to be shot under a moody layer of cloud as below. 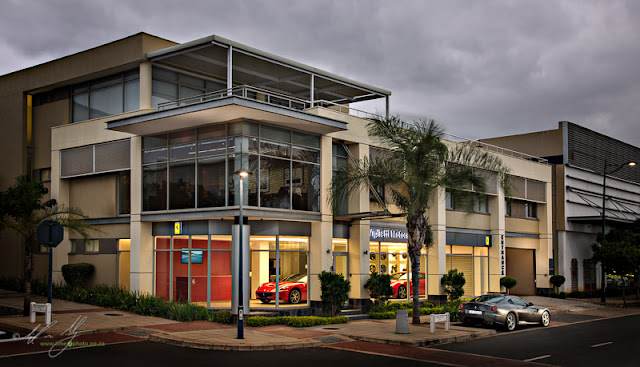 So the final image also had a sky comped in from a shot I took in the Eastern Cape back in 2010. Ultimately I am quite happy about the final result. the client eventually chose to crop (see below) the final image quite dramatically, which is going to run at the top of a page in an up-market glossy magazine and probably for web use and additional advertising at a later stage.

In hind site, now knowing what the client wanted (we had some miscommunication as to the brief) I would have cropped in tighter on the actual shoot, but at the time this really didn't seem to make sense. There are bits that bothered me all the way through. The bushes in the foreground obscure the cars inside, no matter how you move the cars about, and I really learned to dislike the lone palm tree. The brief, as I thought, was to create an eye-catching image of the dealership so that people would recognize the site if they passed by after having seen the image. Layering multiple captures was my technical solution to the less than perfect conditions.