Samuel Johnson famously said, "when a man grows tired of London, he grows tired of life". In some ways the Drakensberg is a little like my London. I never grow tired of it. Right now as I write this I'm sitting with a group of the photographers at Didima Camp in the middle of a cloud. Tara (from African Impact) has just walked in and said, "what happened to the mountains? They're all gone." The vagaries of the weather is part of the joy of the Drakensberg. It's always different. From boiling cloudless heat to wet, dripping, cold in a matter of 12 hours. This is a dynamic mountain that always keeps the visitor guessing as to what's about to happen.

And so we come to the end of another photography tour and workshop with African Impact. We had quite a large group this time round with 12 visitors (not all photographers, but some very talented shooters amongst them). Up until this morning (Monday), there have been predominantly clear skies and more than adequate doses of mind numbing heat. Walking through to the Tunnel in Royal Natal was particularly tiring for a number of the photographers, sapping strength more so than usual. Still, this didn't stop a small group of them walking all the way through to the base of the Tugela Falls (recognized as being the second highest waterfall in the world). 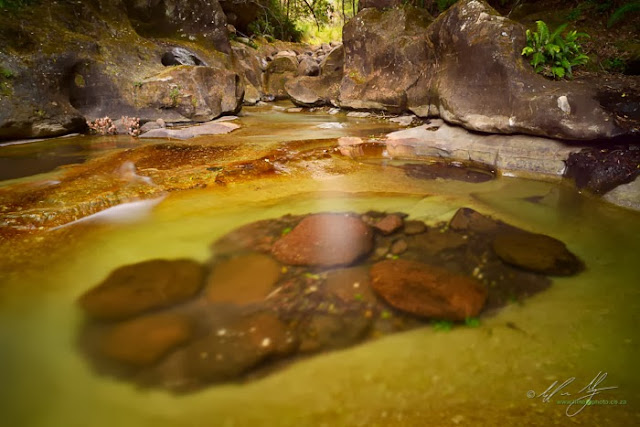 The weather started to finally come and threaten rain on Sunday afternoon as we made our way to the end of Rainbow Gorge (the furthest I've been up the gorge to date, passing the second hanging boulder and coming to a stop at a large boulder-fall that requires a little more than dexterity to climb round). Dark grey clouds materialized as a solid mass in the sky, which was great for photographing the waterfalls, but did make one consider leaving the tunnel portion of the gorge as soon as possible in case of flash flooding.

The one thing that really springs to my mind thinking of the workshop is the importance of carrying water. As photographers it's really easy to overlook something as small as this. Proper hikers almost religiously pack their full water bottles into their packs. In fact hydration bladders are the order of the day. Photographers on the other hand tend to be wrapped up in their equipment and how much it weighs (a lot). So it ends up being easy to overlook the plastic bottle filled with life-saving liquid. 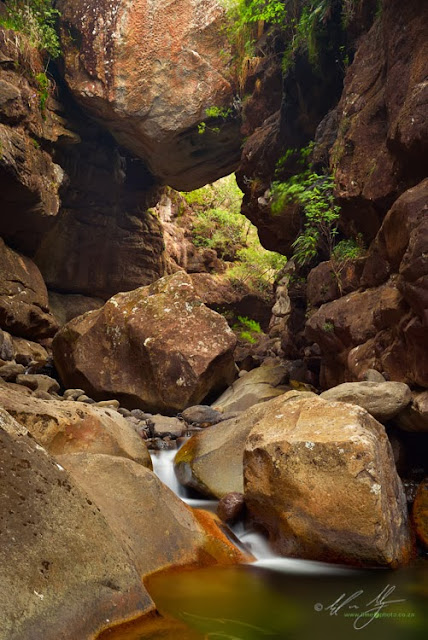 Thankfully this wasn't the case on this trip, but the sheer amount of water that was drunk was an eye-opener. Enough so that I started to think back to how many times photographers have set out without their water bottles. Hiking bags are made to incorporate bladders and the like. Camera bags are not. Yes there is occasionally a little mesh pouch on the side of the bag, but invariably it's positioned where your tripod ends up being carried, so is pointless except to carry something small like a handkerchief or some litter that you pick up. My bag is a specialized trekking camera pack from Lowe-pro. You'd think that being a specialized bag it would have some kind of water bottle holding capacity, but no, I need to use a carabiner that I bought separately to attach the bottle to the bag so that it bangs about against my elbow as I walk (this is because there is a handle that pushes the bottle forward rather than allowing it to lie flat against the side of the pack). Most camera bags are like this, with the water bottle carrying ability either nonexistent or inadequate - added as an afterthought almost. Therein lies the problem. If the bag manufacturers add the water bottle space as an afterthought, so to does the photographer tend to think of the water bottle only as an afterthought (F-Stop bags are a notable exception but cost an arm and a leg so very few photographers actually own them). An odd teaching point, but I think a vital one as a dehydrated photographer tends not to be as creative as a well hydrated and comfortable photographer. 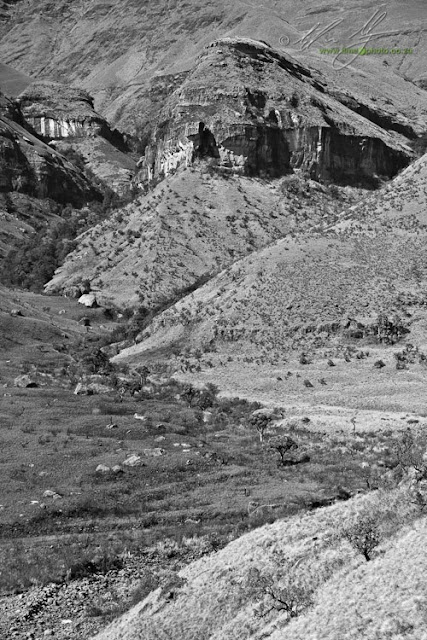 Overall I think we had a wonderful weekend with some beautiful images being created by the photographers (I was genuinely impressed during a crit session on the last evening). Now for the bus and a the drive back to the studio and reality. Thanks to everyone in the group that made it such a good weekend. And thank you also for the patience as we had the small but fairly serious disaster of the bus key snapping and having to wait for a locksmith to come through from Escourt. There are worse places to be stuck, but it can still be annoying having to wait when life gets interesting.
Posted by Emil von Maltitz at 10:11 AM