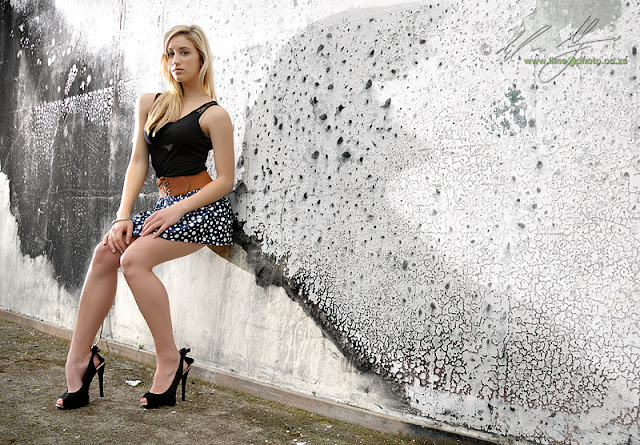 Flash, for some reason or other terrifies the average photographer. This really shouldn't be the case. All it comes down to the hardness/softness of the light, distance from light to subject and intensity of the light source. These three variables can control a myriad number of lighting effects. Even a single flash can end up transforming an image. The key, in my opinion, is not to think of that single flash as the primary light source. Rather, think of it as a way to elevate the lighting that is already apparent in the scene - in these two examples: natural overcast daylight.
In the first image above, we used a bare flash to camera left to both create rim and throw a shadow on the pockmarked sooty wall. At first I didn't see the shape, but as soon as I did, tried to capitalise on the fact that the shadow mimicked the soot mark on Chloe's right. This created shadowy wings, a kind of 'dark angel' effect. 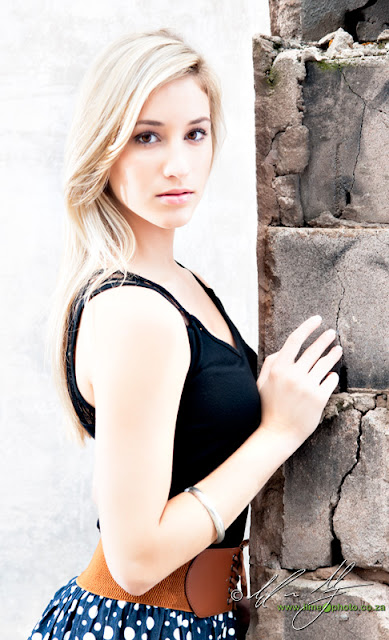 In the second image the bare flash was simply used to create a more three-dimensional lighting effect by thowing light on Chloe's hair. This separates her from the light toned background and models the hair at the same time - flash was positioned about 2 metres behind her, again unmodified but zoomed to about 85mm. We had a reflector in the shot to bounce some of that light back into her face, although the white wall she is leaning against did a pretty good job of this on it's own. If I have a niggle about this shot it's the odd shadow on right cheek of the light passing through her hair.

The purpose of the exercise was of course using a single flash. Although we ended up doing a few two flash takes, these are both examples of a single flash setup. One of the best pieces of advice I've ever come across is to learn how to use one flash effectively before moving on to multiple falsh setups. It's a piece of advice I didn't listen to, and subsequently had to relearn once I'd already acquired the bad habits of over-lighting a subject with too many lights. Start simple, start with one. Learn how to position and set the flash and suddenly the world of flash photography becomes easy.

(as an aside - the gear used in these two images was an Sb 800 flash, Phottix 3.2m light stand, Phottix Stratos II trigger and a Phottix 5in1 105cm reflector. During the day we also used Canon 580Ex's, A Yong Nuo something or other that mimics the 580ex. Most of the students used infrared triggering for the flashes via the pop-up on their D300s, 7Ds, and 60Ds)