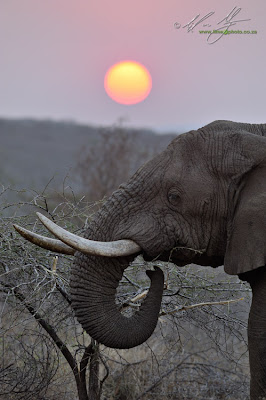 One of the photographic advantages of winter in South Africa is the fact that there is so much dust in the air. Everything is bone dry (unless you live in Durban and even then it's not exactly like the summer time ;walking in a swimming pool' humidity). Most people think that dust has few advantages, but what it does do is add that much more thickness to the perceived atmosphere. What this does is ensure that you can shoot nice orange and red sun balls even when the sun is relatively high above the horizon. It's just that much more difficult to get these during summer. So naturally, it being dry last week while in Thanda, the photography students and myself ended up shooting a lot of sundisks.

As usual the trick to shooting sundisks is to keep an eye on the histogram. It's possible to capture most if not all the details from the shadows through to the sun itself in a single exposure - no HDR required. The panoramic below still needs some work, but the elephant shot is a good example of how much detail can be pulled from the shadows without compromising the sun disk itself. Yes there is likely to be some posterization in the highlights, but it really is minimal. The other thing to be highly aware of is the level of dust in your lens. If you decide to shoot straight on into the sun, subdued or no, then expect to see some floating orbs of light in the middle of your image. Cheaper lenses are also going to fair worse than others. Due to the subdued light it is also a little trickier to get the star-burst effect from the sun. So leave that for summer and areas where there is less dust in the air.


Another good week in Thanda ultimately. Although I have enjoyed the intensity of large groups (June and July), it was great to be able to have a smaller group of only 6 photographers. We were treated some truly fantastic game drives, one of which the photographers jokingly complained that there was too much to photograph (sparring buffalo, red-billed ox-peckers, a drinking nyala and a mud-bathing bull...all at the same time).

Sadly, the usual sunset spot was a bit of a dud, but that's the risk of landscape photography - sometimes the weather just doesn't do what you want it to. The group shot was taken on this particular outing. The dreary and unbroken clouds can be seen in the background. 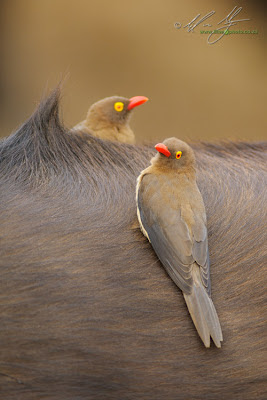 I'm not really sure there's a teaching tip for this week's post. I'm in the middle of various client deadlines and am concentrating more on being creative with the projects. I will be a touch more creative in the writing department next week in all likelihood. Till then....

Postscript: A note on my thoughts on shooting in dusty climates. This is very specific to the experience of shooting in winter in a dusty location. I've shot in winter in mountainous terrain in Southern Africa where the sun is not only intense, but does create star-burst effects. Similarly if there is sufficient humidity in the air in summer, it can cause the same dulling of the sun's rays when low on the horizon. Learnt to recognize the light's individuals traits and shoot accordingly....ha, there was a teaching point afterall :)
Posted by Emil von Maltitz at 2:56 PM