Slice and Dice - and a note on Lightroom 4 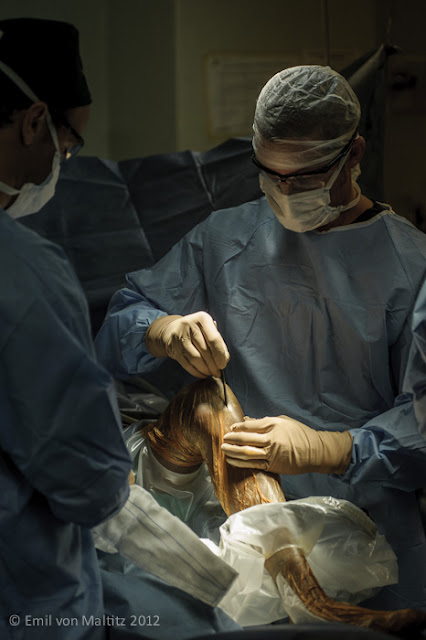 I had my first surgery the other day...one that I photographed that is. I received a call from a client to be at one of the government hospitals for a shoot. except the specifics were rather lacking. Even the client, an event organiser for the medical fraternity, wasn't entirely sure of what I'd be shooting. My previous shoot for the same client had been a fairly conventional event: the opening of a new forensic unit - so the usual event/conference shots, some creative portraits of the guest speaker and a few group shots that were a little different to the standard 'stand in a line and say cheese'. So conservative guess was therefore this was going to be much of the same.

Not so as it turned out. Instead my assistant, Claire, and I were ushered in to a change room area and told we were to find some 'scrubs' that fitted and to listen intently to the instructions that the surgical matron would be issuing to us. Next we were led down a long corridor, round a bend and into a large and fairly sterile room where a bunch of doctors were leaning over...and for some reason I was still surprised... a women with the inside of her knee staring up at the bright overhead lights. Okay, here we go. 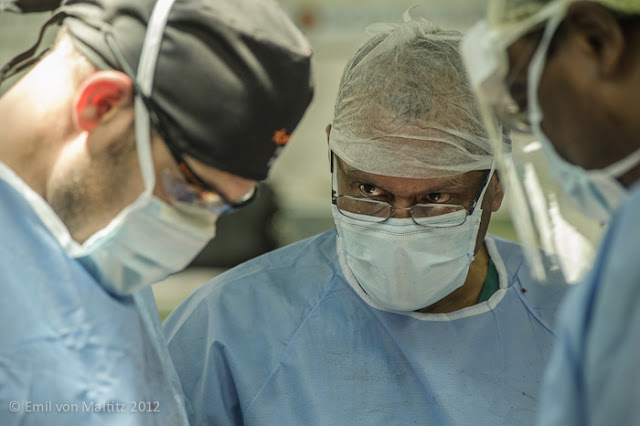 So for my first surgery it actually went really well. The operation that was being performed was a knee replacement. The photography was being commissioned by the actual manufacturers of these titanium marvels for a whole host of usages. So the basic premise was to capture some of the drama of the operating room, keep enough away from the surgeons so as not to get in the way (it is a sterile environment after all - one where a photographer bumping into finely honed surgical knives is probably not the best of ideas) and as a bonus, please show some close-ups of the products in question...gulp.

Here's where I say thank goodness I'm not a war-correspondent! Okay, it actually wasn't as bad as all that. I have an abnormal fear of needles, so I was concerned about seeing the first incision in the patient's knee and what happens thereafter (I won't go into too much detail for benefit of more sensitive readers). In the end though holding a camera to your eye divorces you from the reality that you are photographing. Suddenly you are thinking about light and composition and you become completely unaware of things like a bit of gristle flying up from a small saw blade (that doesn't mean you don't remember it afterwards). Surgeons see this on a daily basis and become immune, but I wonder what it was like the first time that they saw a surgery. At any rate the images worked and the client was really happy. 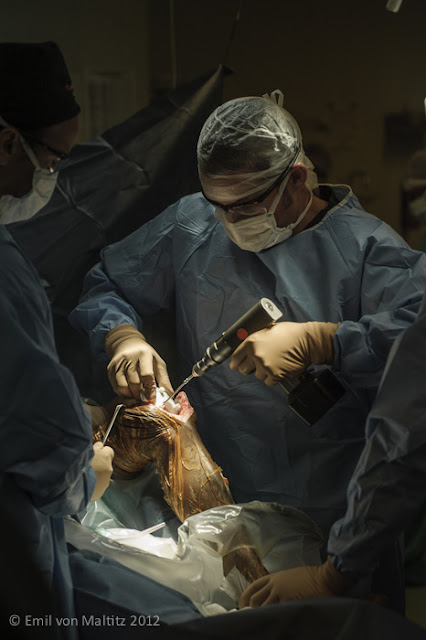 It also gave me my first opportunity to really try out Lightroom 4 for processing. I'm a Capture NX2 fan despite it's obvious flaws, but for events and situations where I have to batch out a lot of images quickly my goto solution has been Lightroom 3 (I hated Lightroom 2 and avoided it at all costs. LR3 was a major advance IMHO). What astounded me though was the ability to recover highlights as well as pull details from the murky shadows. LR4 excels at the extreme ranges of exposure. The issue with in-surgery lighting is that it is all really well lit, BUT, the light that shines down onto the operating table is insanely bright compared to the rest of the room. Now, bang that light onto exposed white (bone and other whitish parts of the body - use your imagination) and you hit blow-out central. The only way I could get near to finding detail on the camera's histogram was to massively underexpose the average of the scene. Looking at the histo in surgery I was terrified that my images would be as noisy as beach sand and still have blown highlights on the products. Not so thankfully. The new highlights, whites, shadows and blacks sliders made it almost too easy to give detail to the shadows and recover my highlights to the point that it looked like I actually had my own lights in there (which I didn't). Yes, this is possible using NX2 or CS5, but not with this much ease. I'm not quite ready to give up my usual fine art and landscape workflow that are centered around NEF files and NX2, but man LR4 makes it tempting!
Posted by Emil von Maltitz at 9:31 AM