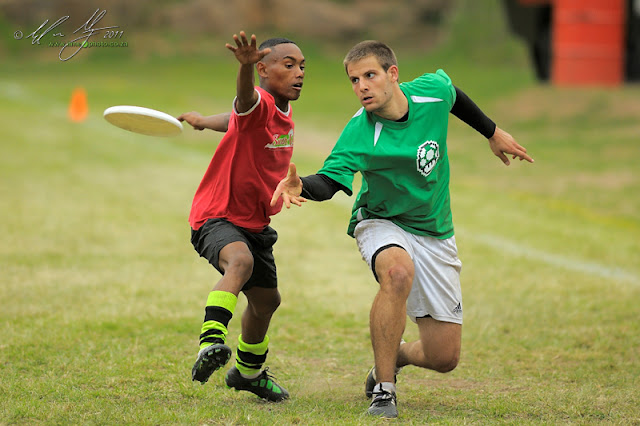 Last month my sister-in-law came up to Durban to take part in an ultimate frisbee competition along with a team from Cape Town called the 'Chillies'. She works for a non-profit organisation called 'Life X Change' ,  youth development program that takes adolescents off the street and tries to empower them so that they are able to change their lives for the better. Many of these young guys have been in detention, are addicted to some sort of substance, have been in gangs or any number of foul ups that can put someone into a spiral from which they can't climb out. The point of this is that the Chillies allowed two of these 'life exchangers' as well as my sister-in-law into the team for the National Competition which was held this year in sunny (or not as the case may be) Durban. 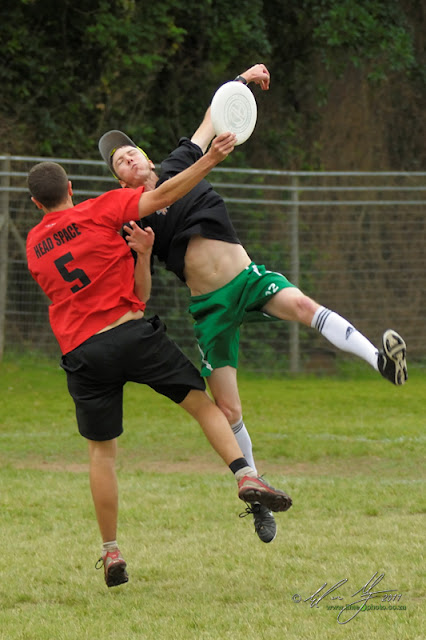 Which gave me a chance to practice my sports photography, and wow was I rusty. the last time I shot sports was for the build-up to the Beijing Olympics where I was assigned by Getty to cover the development aspect of the buildup by a large international mining company. The development aspect happened to be the development of soccer in the rural and township clubs. So I found myself photographing a lot of football for a while. As with any skill though, if you don't practice, you get rusty.

Enthusiasts who have never shot sport tend to think that modern cameras do all the work for the photographer. not so. Autofocus actually only has limited usefulness. Auto-exposure similarly can get things wrong a lot of the time, meaning that sports pros are often in manual mode and manual focus. Yes, AF is incredible nowadays, but it can actually be harder to autofocus than to manually follow-focus on a running player.


First off, metering: In the old days of film sports pros would spot meter off the one constant in the game - the grass. Setting the camera to manual they could then pretty much shoot as they liked and just keep an eye on the changing light-levels, adjusting occasionally to suit. If you ever go and watch a big sports game you'll notice that the old-hands sit in one place. They DON'T go charging up and down the field to follow the action. That's why they are able to happily meter off the grass and stick it in manual. In some ways things haven't changed. Now though we have the welcome addition of a histogram to check the exposure. A quick look at the histogram and we can be certain that the exposure is right when we are pointing in a certain direction down the field (it's harder to do this when we are on the sideline and in the middle of the field as we'll be swinging the lens in two different directions). So the gist of it is that manual metering is the most consistent, although aperture priority is the next fallback mode. Again, a beginner might think 'why not shutter priority?'. The problem with shutter priority is that if the light level changes and you are already at your maximum aperture (the widest aperture) the camera will still fire, but underexpose. In aperture priority at the maximum aperture the shutter speed just drops a stop when the light goes. This means the exposure is still good, but there may be a touch of blur on the movement, which isn't always a bad thing. 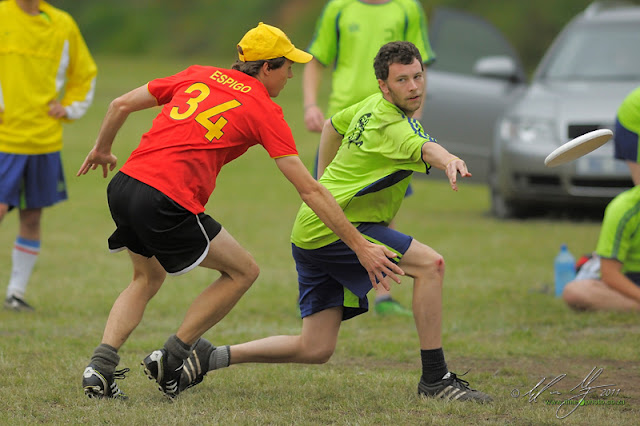 Then there's focus. Here the best advice is the same thing that you do on the field in most team sports - 'mark your man'. Trying to follow the ball is nigh on impossible (sometimes it works, but only sometimes). Whether you choose to manual focus or autofocus, keeping the lens trained on one player is the best way to achieve accurate focus. The ball, or frisbee in this case, moves faster than we can keep up with, but not the players. It doesn't matter how fast a player runs, they are slower than the ball or frisbee and consequently a whole lot easier to follow. With practice it becomes possible to accurately manual focus, as was the case with all the images presented here (it's not that I don't have an autofocus camera, but that my lenses were either manual focus, the 400mm f3.5, or were rather slow in AF performance, the 80-200mm f2.8 EDIF). 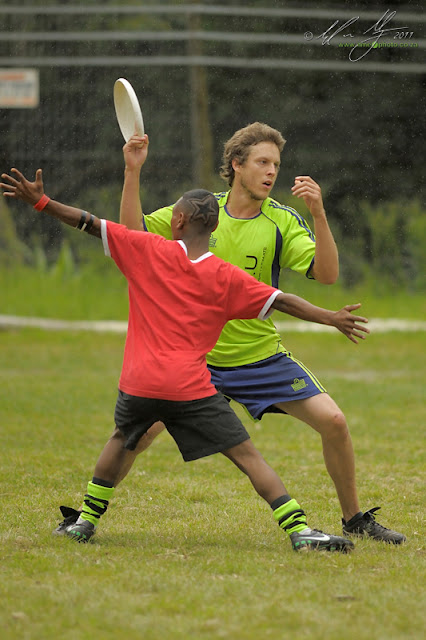 Once you have the knack of following an individual, then it's just a matter of practice getting the ball, puck, shuttle-cock or whatever other object that is being played with in the frame as well. This is the final 'rule' of good sports images. There are very few great shots that don't have the 'ball' in the frame. Without it, it's just a bunch of people frozen in time. Yes, some images are memorable without it, but that's due to another factor such as they players taking a swing at each other, or some other out of the ordinary moment.

Sport's photography, doesn't necessarily require a vast equipment outlay (an APS-C sensor camera - think Canon EOS 550D or Nikon D90 - with a 70-300mm lens is perfectly adequate for decent sports shots). Yes, a D3s or the new Canon 1Dx with a 400mm f2.8 would be lovely, but the reality is that few soccer moms or dads can afford an almost luxury vehicle worth of camera gear. Bumping the ISO up a tad and getting the composition and focus right and your shots can be as good as the double truck images in Sport's Illustrated. It's just a matter of practice (of which I clearly need some more of ;-) ).