Pros and Cons of the Strobist approach

When you start doing more than hobby photography, it fast becomes a reality that you will occasionally, if not often, require the use of artificial lighting. Let’s assume that you are doing the occasional portrait, maybe wedding or event or the odd bit of location photography. Very fast the realisation dawns that you are going to need the odd bit of studio equipment; some lights, a bunch of stands and a bag full of light modifiers. You essentially have two options ahead: full studio outfit with monoblock lights, or the strobist approach. 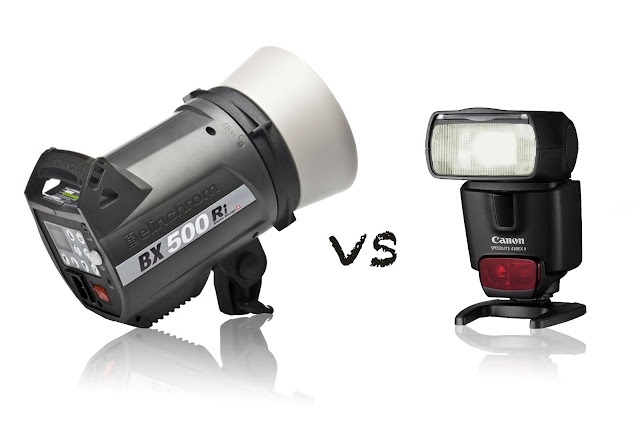 Strobism is a movement that really started gaining ground around a decade ago with the advent of small, powerful, hotshoe flashes coupled with the emergence of an army digital camera wielding enthusiasts suddenly eyeing the opportunity of becoming professional digital camera wielding photographers. Strobism relies on the use of small flashes in lieu of large studio lights (also known as mono-block lights or monos). The supposed primary advantage of strobism is that of cost. Theoretically it is cheaper to set up a strobist outfit than a regular monolight outfit. So here I’m going to evaluate that as well as other supposed pro’s and cons of the strobist approach

Cost. Yes, the cost of a hotshoe flash is cheaper than that of a monoblock, but only if you are buying the cheap generic flashes out of China (think Yuong Nuo and Phottix). When you look at the cost of a Nikon SB-910 or Canon EF580 then suddenly it’s actually more expensive to buy hotshoe flashes than a number of monoblocks. The Paul C Buff Einsteins are cheaper than both and you can practically buy 2 Alienbees or a full set of small 200W/s Elinchroms (and they’re the expensive flashes) for the same price as an SB-910 with a stand. So cost is actually not the best reason for going the strobist approach. But, there is another variable to the cost factor. Photographers often already have a small hotshoe flash, sometimes more than one. So, it’s possible that the cost has already been borne and now it’s only a matter of investing in stands and modifiers. Now we’re talking a more affordable option. Or, as I mention above, there are a number of generic flashes that are extremely affordable and still have the all important manual mode that is required of strobism (the ability to vary the power outage on the flash unit itself).

Durability. Anyone who has ever seen a monoblock toppling over on it’s stand will appreciate the durability of a small hotshoe flash. They are not indestructible admittedly, but they are a whole lot more rugged than a large studio light. I’ve had flashes blow over in the wind before and still keep on firing. Better yet, they are more weather resistant that studio lights. For a start the whole package - batteries and light - are all self-contained. Monoblocks, either require a mains outlet or a separate battery pack.

Flexibility. Here is where the use of small hotshoe flashes excels. They’re small, light and self-contained meaning that they are easy to carry, setup and can fit into just about any crevice you can imagine. Need more power? Put a couple together to double the output (or add two together and down the power outage so that the recycle time is shorter). Being able to head out to location with a single bag of lights makes life so much easier than when you need heads that weigh in at 2-4 kg each (in the case of monoblocks). Talking of weight, a large monoblock on the top of a flimsy light-stand is pretty ponderous. Small hotshoe flashes work beautifully on light stands. Best thing, you don’t need the heaviest light stands in the world to hold them up (although you might find sandbags a useful addition to weight down the stand).

Another major advantage of the strobist route is that if you opt for the expensive marque flashes you can trigger them via infrared and now radio (Canon) and wirelessly adjust the output of the flashes, even if they are out of arm reach (like at the top of a tower while you are on the ground). Monoblocks are harder to do this with. There are now also generic light triggers that allow TTL metering and wireless control such as Phottix’s Odin, for Canon,  and soon an option for Nikon (update: there's an Odin for Nikon and Pixel and Yong Nuo also produce similar setups).

Cost. I’ve already mentioned it above, but a small set of low power monoblocks is actually a cheaper alternative than strobes. I personally don’t recommend this route though as it’s always better to buy as much W/s power as you can afford. This means that small 150 or 200 W/s monoblocks are not really an advantage over hotshoe flashes.

Power. Here lies the biggest drawback of the strobist approach. There simply isn’t a lot of power generated by a small flash with four small AA batteries. If you need oomph you either need to get a monoblock with 300 W/s or more (preferably 400-500W/s) or you have to couple a bunch of hotshoe flashes together. The latter does mean that you can match the output of a 500 or even 600W/s light, but it still doesn’t compete against a large 1000W/s monoblock.

On the issue of power, there are those pesky AA batteries. You go through a lot of them if you go down the strobist route. A lot! It’s possible to buy lithium battery packs both from the camera marques as well as generic manufacturers like Phottix or Godox. These are a nice option but ramp up the cost of strobism considerably. I can guarantee that you’ll be considering them the first time you find yourself waiting for flashes to recycle in the middle of an important shoot though. Blasting a hotshoe flash at full power drains batteries fast (enough pops and it also potentially damages the flash tube). One of the most important jobs my assistants end up doing during a shoot is changing batteries in my strobes. So you do need to factor batteries into your cost calculations. The issue of recyclable batteries vs alkaline is another story (I’ve had bad experiences with recyclable batteries in the past but am looking back into it as my battery costs escalate). Recycle times really irk me. Although there is a recycle time on monoblocks, it’s negligible compared to hotshoe flashes and their interminably long waits.

Modifiers. There are simply fewer modifiers for hotshoe flashes than there are monoblocks. It is possible to kludge solutions together though. You can always spot the strobist by the bag full of home made modifiers that they carry.

Ultimately it would be nice to have a selection of both monoblocks and hotshoe strobes, but you have to start somewhere. I personally recommend starting with the strobist approach. It’s simply more versatile and as an added bonus works equally well with monoblocks. On the flip-side you can’t strap a monoblock to the top of our camera and walk around with it. Hotshoe strobes are like the leatherman of lights whereas the monoblock is a great big double handed sword. The leatherman is probably going to be more useful more of the time than the sword...unless you have to kill a dragon that is.