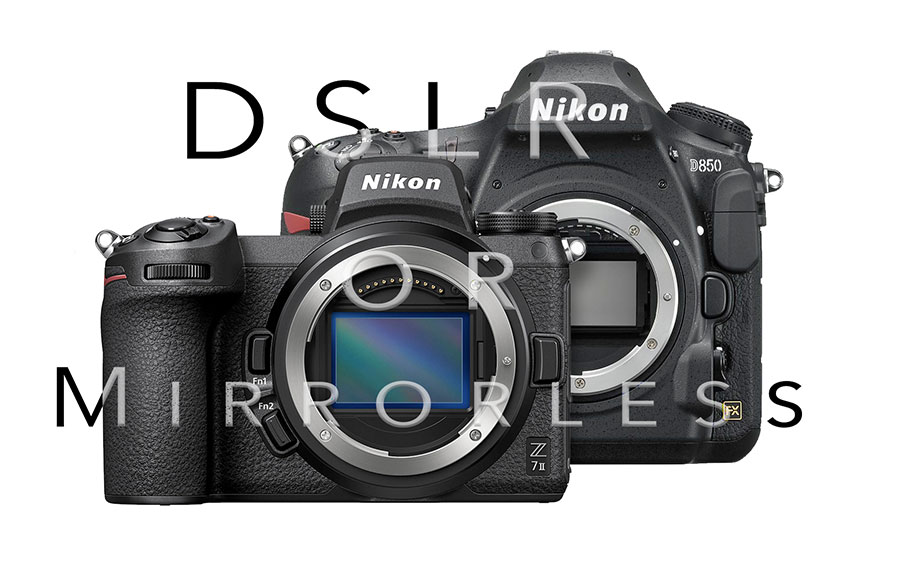 Two conversations within two days of each other with two photographers on either side of the country made me realise the amount of angst dedicated photographers are feeling as to their equipment choices and the future of their gear. I am talking about mirrorless and the apparent death of the DSLR of course. It’s a trending topic on camera forums, clubs and amongst enthusiasts the world over. Should you move to mirrorless, or stick with your DSLR?

The conversation usually revolves around a concern for the longevity and value of the system that you have opted to use for your own personal photography. In reality though there are more complex emotions at play, often with unconscious brand bias, and a fear of being left out. Regardless of the motivations, photographers are questioning the equipment they have, and the brands they have chosen in the past.

Up near the top of enthusiast photographers’ concerns is the apparent loss in value of conventional DSLR equipment. The thinking goes that as the new technology emerges, the financial value of the existing equipment diminishes (some would argue disappears). So you worry that the camera you buy for X will be 1/10 the value in a relatively brief period of time, meaning that if you sell at the reduced value, you simply do not recoup enough in order to ‘upgrade’.


Personally I think this is the wrong argument to be making. All equipment diminishes in value over time. I bought a secondhand D3x about a decade ago (so definitely not at the new price). When the D3x first appeared it sold for a princely R120,000 in South Africa (higher than the listed launch price of US$8000 in 2009). I sold the camera after a decade of use for R13,000 (less than US$1000). It was still producing perfectly useable images for the client work that I do (in fact it was sold to another professional photographer who continues to use it as a workhorse camera), but was simply not being used enough as the studio has several other newer cameras. Did I get my monies’ worth. Absolutely! The camera paid for itself multiple times over by the time I sold it on. The value of a camera isn’t in the physical camera itself (unless of course you are collecting Leica collectibles), it is in the images that it produces.

Jumping across to mirrorless doesn’t mean that the financial value of that will hold either. The Nikon Z7 was launched in 2018 for US$3400. It is only 3 years old, and you can pick them up on special, brand new, for less than US$2500 (and it includes the FTZ adapter). Yet, the Z7 is only marginally different to its successor the Z7II, and is to all intents and purposes identical in IQ (Thom Hogan has even pointed out on his site). Ask a Sony or Fujifilm user about the inherent financial value of a secondhand camera and they’ll complain about the loss in value in exactly the same way as the DSLR users do.

Personally a far better idea is to think of your camera as a rental. What is the annual rental of your equipment. NEVER consider what the residual value will be when you sell, because there is no way that any technology equipment will hold value over time (again, unless it’s a collectible Leica, and even then it’s questionable whether the newer Leica’s will still hold in value like their film counterparts have). My personal calculation revolves around the outlaid cost in relation to what I can create (in my case earn) with it. This is a personal calculation that is different for everyone. My benchmark is 45MP Full-Frame stills output, 4k30p video with a reasonable gradable file (not necessarily ProRes RAW as my clientele currently don’t require that. The benchmark for others will be lower, or higher, depending on what they shoot and the output they require (if you are shooting real estate for a realtor, you really don’t need anything more than an entry level camera with 16MP sensor, a tripod, a decent wide-angle lens and a good flash - NEEDS are very different to WANTS).

Bizarrely photographers are jettisoning equipment to move over to mirrorless, and making tradeoffs as a result. The Canon 5Dmkiv is a fantastic camera, yet Canon shooters are ditching it for the R6, which has lower pixel count. Yes, the R6 has a new swivelling LCD and can shoot 4K/60p video, but the 5Dmkiv is no slouch at video either and is still being used by professionals around the world as a workhorse camera. Just because mirrorless is here, doesn’t mean that the 5D suddenly dies on the spot.

An even closer comparison is that of the stellar Nikon D850 camera. The 45mp sensor is to all intents and purposes the same one that sits inside the Z7 and Z7II. The D850 has better weather-sealing, is built with sturdier materials and is part of the Nikon professional range meaning that it has support for things like the 12-pin accessory port. The Z7 doesn’t, and is actually built as a ‘prosumer camera’ (it’s a bloody good prosumer camera though). Anyone wanting to get rid of their D850 to pick up a Z7II isn’t doing it for better image quality. The brand-spanking-Z9 puts the 45MP sensor that Nikon has been using into a proper pro-level body at last, but even then the concluding remarks by the DPReview team in the initial assessment of the Z9 were “After all, if it can deliver near-D850 image quality only much faster, with image stabilization, much better autofocus and with access to better lenses, it seems fair to assume some photographers will be willing to pay a premium for that.” (italics added by me). So the questions needs to be asked; do you really gain something from jumping across to mirrorless.

Closely aligned with FOMO is the Fear Of Being Left Behind. With all the development that is taking place on the mirrorless front, there is a concern that if you are a DSLR user you will not be supported in the future. Canon have even compounded this by unequivocally stating that they will no longer be developing the EF mount. Nikon, although they state that they will continue to support their DSLR user base, certainly doesn’t seem to be doing anything in the line of marketing DSLR cameras. This is weird considering that the D780 is a superb all-rounder camera that users have said equals and betters the Z6II (same internals, better weather-sealing, longer lasting battery, and an optical viewfinder for those who want it - want a mirrorless? Switch to live view and the camera behaves exactly like a Z6II).

The concern of FOMO is heightened by the flurry of lens development announcements that the manufacturers are using to drum hype and support in what is really an ailing industry. So we hear about interesting new lenses like the Nikon NOCT lenses and Canon’s brilliant new f2.8 series zooms and super affordable small aperture telescoping telephotos. There has to be a lot of development as the manufacturers have to churn out enough new lenses to tempt potential new mirrorless users into the fray.

The thing is, what lenses did you still want? I can understand some niche professionals bemoaning that an exotic lens that they were holding out for has not been and now never will be produced for the EF mount. The irony of course is that enthusiasts should be rejoicing at this as it potentially brings the financial cost of the existing exotic lenses down to relatively affordable levels. You wanted a super-telephoto f4 or f2.8 lens? Perhaps in a few years when Canon, Nikon and Sony have launched their mirrorless mount exotics, you’ll finally be able to buy that monstrous lens that used to cost more than a car, but has dropped precipitously in value since the rental houses and sports agencies have started picking up the newer mirrorless mount versions (I personally think it’ll be a while yet before they drop that much actually).

I ALSO Have Angst

Don’t get me wrong. I have handled and played with the Canon R5, R6, Nikon Z6II, Z7II, a Sony A7RIV and A9, and even a Fujifilm GFR50 (not the 100 yet). They are amazing, beautifully made cameras, all of them…and yet not one of them will fundamentally improve the images that I am currently producing (I could argue that the Fujifilm GFX100s would give me potentially higher resolution and better IQ, but at the cost differential to what I earn from my images, it doesn’t make any financial sense at all).

Everyone is talking about the newly announced Nikon Z9 as the new professional photographer’s halo product, but again, if some magical angel handed one to me tomorrow, it would not change the way that I shoot in any meaningful or even fundamental way. If you are currently photographing with a less than four year old camera, you are working with an image sensor that is as close to state of the art as it is possible to get. If you have the available resources, buying into the new mirrorless cameras that are available is not a bad idea in any way.

The problem is that a lot of photographers are approaching the mirrorless vs DSLR debate in the same way that they approached the digital vs film argument. There is zero similarity between the two arguments though. The core technology remains the same with mirrorless and digital, whereas there was a seismic shift in the way the image was captured when transitioning from film to mirrorless.

So whither do you go?

I ended up writing an entire article on whether to opt for DSLR or mirrorless on the Nature’s Light blog. You can read it there by clicking this link. The short answer though is:

At the beginning of this article I pointed out in an aside that NEEDS are very different to WANTS. I really do want a mirrorless camera. I love the fact that they are smaller and lighter than their DSLR counterparts (with the appropriately selected lenses of course…if you get the f2.8s you - bizarrely - actually end up heavier in most cases). I’ve done my calculations and right now I am not rewarded in any way for moving to mirrorless. That’ll probably change of course. I strongly suspect that a lot of photographers are in the same boat, and that’s fine. Mirrorless will happen for us, just not today. So why worry?