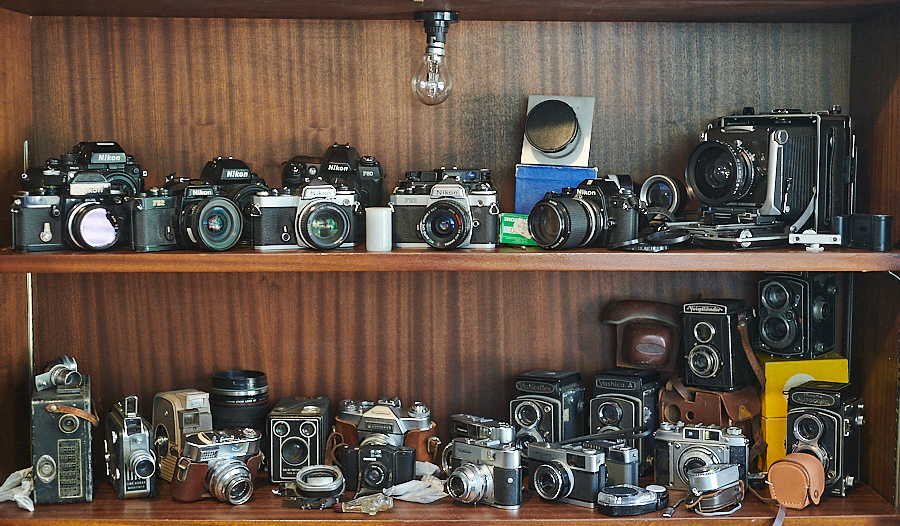 It has become popular to ridicule the much copied act of Gear Acquisition Syndrome, or GAS for short. For those who aren’t familiar with the acronym GAS, it refers to the build up of equipment in the never-ending  pursuit for some kind of silver bullet for our photography (where that silver bullet is a piece of equipment). The first part of GAS is the reasoning that every flaw in a photograph is surmised to be a result of the equipment, not the photographer. If the image is out of focus, get a new lens. If the image is blurred, get a new camera, etcetera. The second part of GAS is the insatiable desire to play with new toys and the justification created to buy them. So the thinking goes, “I am starting out in wildlife photography…wildlife requires big lenses…I’ll buy a big lens….oh dear, I’m not getting close enough [to the subject]…I’ll buy another bigger lens”, and so it goes.

The argument against GAS is that it isn’t the gear, but the photographer that creates great images. This is true, to an extent. The issue I have with the pithy argument is that it is most often stated by the photographer who already has all the equipment (the good stuff, not the knock-offs either) they would ever need. So I call bullsh*t on the trendy instagrammer who proclaims GAS is the devil while nonchalantly swinging a Leica from her shoulder (admittedly I did not actually find this image, but am willing to bet it’s out there). Another one of the pithy comments I came across was that, “the photographer’s interest in gear is inversely proportional to their ability as a photographer”. Again, absolute rubbish. Some of the world’s best photographers are extremely picky as to the equipment that they use. There is ample evidence of this in the myriad articles and interviews with professional photographers the world over.

I have always enjoyed David Hurn’s takeaway (from the book ‘On Being a Photographer’) that painters can be very demanding and exacting of their brushes and the paints that they use to create their works. So too, are photographers concerned about using equipment that aids them in creating images. A painter won’t willingly use a inferior brush to paint with unless they are trying to make some kind of statement. In the same way, a professional or discerning photographer is unlikely to use an inferior camera or lens to make their images. So GAS is absolutely natural. Their is a reason why photographers rapidly graduate from the entry level lenses to something more expensive. Sure, the entry level lens might not be rubbish, and in the right hands can create awesome photographs, but the reasons why that lens is entry level have a lot to do with manufacturing costs and ways that the manufacturer has tried to bring those down. This invariably impacts negatively on the shooting experience.

Here’s an example: A novice photographer has an entry level camera with its kit lens. Let’s say it’s the Nikon D3300 with the cheap 18-55mm lens (luckily for her it comes bundled with a small aluminium tripod). She happens to be interested in landscape photography and decides to get a cheap set of square resin filters to go with her kit. She very quickly realises the limitation of the lens when using the filters as the front of the lens rotates during focusing, making the use of any filters that require adjustment extremely frustrating. The answer is to upgrade the lens to one which doesn’t have a rotating front element (probably more expensive). Then she discovers that the cheap and cheerful tripod (plastic fantastic) doesn’t actually hold her camera steady, so she invests in a sturdier one (this is an article all in itself as the second tripod that someone buys is always never the right tripod). Then, oh dear, the filters she bought turn out to be really nasty, and produce all sorts of issues with colour and contrast, so she buys a better type of holder and filter (more money). Then, some wag at the local camera club points out the virtues of the next model up in the range. Admittedly, those virtues are real, so the D3300 is relegated to backup camera….and the gear acquisition begins in earnest. GAS has reared its head once more.

The above example is pretty much standard for everyone who has picked up a camera and shown more than a casual interest in creating photographic images. There is nothing wrong with this. The problem, and where GAS gets a bad name, is that we don’t know when to hold back and the gear pile-up overtakes the skill acquisition, or turns into the hunt for the silver bullet. Continuing on from the example above:

The photographer now has a better lens, better camera body and tripod to shoot with. Now things like a decent bag to carry all of this starts to become a real need for her. This will take her down a rabbit hole of brands and styles and once more she’ll end up with more than one bag as she discovers that the first bag wasn’t actually what she needed in the first place. From the bag will then be the array of lenses as her lens arsenal grows. Like almost all photographers starting out she will tend towards the entry level of the lens type, to discover that it doesn’t perform the way she wanted it to (there is a reason that most camera manufacturers have two versions of the 70-300mm telephoto zoom lens - a cheap and nasty version, and the one you should save to get). It’s at this point that GAS can become dangerous for the bank account. As self-doubt and second-thoughts start to gather steam the temptation to switch brands or type of camera can start to grow…more money, and an ever increasing gear cabinet.

GAS is not something to be derided. It is a common condition, and probably a necessary one. It can get ridiculous as to what we end up buying in the theory that it’ll improve our images in some way. However, calculated GAS - that is the rigorous research of new equipment with a view to purchasing - can also be fun and can actually end up teaching the photographer something too. It was through poring over issues of Practical Photography and the various GAS oriented gear articles that I learned about things like the nuances of autofocus, metering and film stocks as a teenager. One piece of information led to the search for more information, which ultimately trickled down into the way that I shot (through searching for better lenses I came across the concepts of hyperfocal focusing and diffraction limitation).


GAS can also be an important aid to inspiration. There is nothing quite like having a new camera or lens to motivate one to photograph. Sure, the lustre might wear off, but the new gear does get us shooting. Sometimes it can be something as simple as getting a new polariser filter, or an L-plate for the camera. There are also pieces of equipment that genuinely open up new creative avenues for a photographer. This happened to me when I bought the Laowa 12mm ultra wide lens for architectural photography. It gave me the opportunity to photograph some subjects in genuinely different ways to how I had been shooting before. Similarly, buying a Godox AD360 changed the way I approached outdoor environmental portraiture. I know other photographers who have claimed that their purchase of a camera like the Fujifilm X100 has been a complete game-changer for their photography (while others of course have said that it was a complete waste of money and time).

Ultimately, it can be a little like growing up. We all have to start somewhere, and the growing pains are necessary. Invariably we start with the most basic and affordable of equipment. From there, as we learn the ropes, we get progressively better bits of kit along with an ever expanding cupboard of gear. Owning good gear can impact on our images in very positive ways. People who wearily announce that it is not the camera, but the photographer either already have the camera, or still want it but are publicly professing to the world that they don’t need it, although probably secretly yearn for it. Ultimately, the only cure for GAS…is to have already taken it to its logical conclusion: to have made sufficient gear purchases that we have discovered the equipment we really need and want to live with. Once you are there, new gear purchases tend to be those that replace that which is broken, rather than that we think will make us better photographers. Most of us do get there.
Posted by Emil von Maltitz at 12:54 PM