I check the thermometer once more before noting the time on my phone's stopwatch and inverting the Paterson tank, followed by the usual tap-tapping of its base against the kitchen counter. I'm doing this so that air bubbles don't get trapped between the loosely wound celluloid film, leaving pockets that don't get enough of the silver dissolving chemicals that are sloshing around inside the light-tight tank. Fourteen minutes is up and I pour out the now blackened (dark from dissolved silver crystals) developer before adding the hypo solution we call fixer to the tank. This will then 'fix' the light sensitive silver halide crystals that remain on the film, ensuring that when I finally remove the film from the tank, the images won't immediately fade into a splodgy darkness. Five minutes later, unable to contain my excitement, I check the wet film against the light to see the faces and places I have captured shining back at me in inverse tones (it's always been like this, that sense of excitement and trepidation after developing a roll of film). Then, being responsible, I return the film reel back to the tank for a thorough wash.


I am a photographer, which means that I am also partly a gear-head. I know that theoretically there are photographers out there who don't care about equipment, but I am yet to meet one of these rare breed. So I get excited about new bits of kit. I actually sat through the full product announcement of the Fujifilm GFX 50s, camera nerd that I am (although I also know of two other Durban based photographers who did the same...we ended up texting each other midway through) - I genuinely think that it could be a  game changing camera for the industry. However, no matter how exciting modern cameras are, they simply do not have the same effect on me as when I pull a still wet film from a reel. It's more than nostalgia. There is a sense of magic, of mystery, that just doesn't exist with digital. In a way it's more personal.

I don't shoot a lot of film. I am quite particular about it actually. If anyone in South Africa still processed E6 (the chemical development from for positive transparency film) I would probably still be trying to run the odd plate through my Linhof, as expensive as it is. As there isn't I have relegated myself to black and white photography. It's relatively inexpensive, and most, if not all of the work, can be done at home. You don't need a darkroom, just a dark cupboard to load the film into the tank and an understanding partner to let you take over the kitchen counter every so often to mix chemistry on (and a solid elbow for cleaning up afterwards - development chemistry is NOT designed to go with food).


Taking over the kitchen counter today. Yay for Ilford! #darkroom #blackandwhitephotography #traditionalphotography
A post shared by Nature's Light (@natures_light_tours) on Apr 5, 2016 at 2:56am PDT


It's a hassle. There is no instant feedback. Sometimes it's weeks between shooting the image and processing the roll of film. It might take even longer before I get the chance to scan or photograph the negative so as to digitize them. When I finally do get to working on the image I end up with a black and white image, completely saturated with grain, muddy shadows and limited , compared to digital, dynamic range. Directly compared from a technical point of view there is no comparison. The files from my D800 blow the 120 (6x4,5 format) negs from a Bronica I am using out of the water. Or at least they do on the screen.

So why shoot film? Why on earth spend the money and time to create images in such an antiquated fashion? There are several things that compel me to shoot film from time to time. One is the inherent technical nature of film  photography. Digital is easy: Point, click, chimp, adjust and shoot again. This is fantastic for the work that I do. I rarely walk away thinking I didn’t get the shot simply because I have already seen the image on the rear LCD. In fact, often the client has already signed off the image before I have even offloaded it onto a computer. The comfort in this knowledge is truly phenomenal. Film has none of that. But, the wonder and suspense of film creates an excitement around it. It becomes a test of your knowledge and skill just to get the basic physics behind the image right, let alone the aesthetics in the composition and timing of the shot. Creating the image is a challenge, and one that is both fun and exciting to take part in.

Sticking with the technical, I have tended to strive towards an inherent technical perfection in my images (that is not to say that I manage to achieve that, only that it is what I strive for). Digital opens itself towards that perfection. That is, until you have looked at a large 4x5 transparency through a loupe on a light table! The detail and smooth gradation between tones is extraordinary. Digitised, the files are still wonderful to look at and use.

[ For those interested: The image below that I digitised for this blog post measures to an astounding 161 megapixels. It was shot on Fuji Provia 100f transparency film in an old Linhof Technica III camera with a 127mm lens. I rephotographed it using a Nikon D800 with a 105mm macro lens. I shot the old transparency on a light box in eight sections which were there stitched together as a panoramic output in Lightroom.] 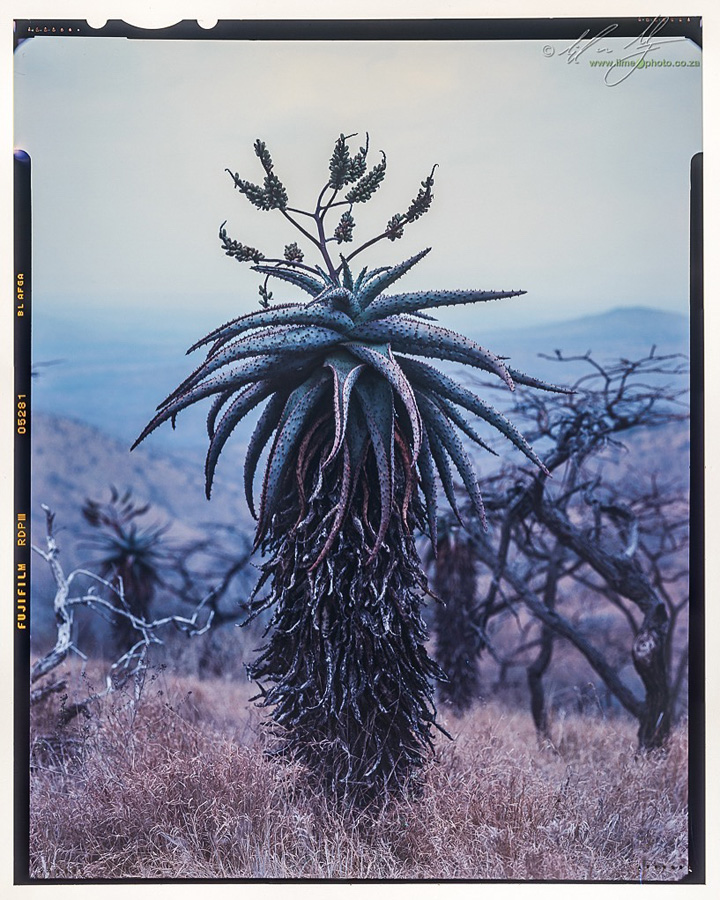 There is also the actual look of film. Nowadays we use in-app filters to recreate the look of film from yesteryear. Of course, if you really want to add the #nofilter label, all you have to do is shoot in film. When I was shooting film pre digital, I tended to lean towards the ultra-vibrant Fuji Velvia film. Before E6 was abandoned commercially in South Africa I had moved towards Fuji Provia 100f. Now, as I tend to shoot on Ilford Delta 400 because of it’s signature grain and what I personally feel is a wonderful contrast range. One of the things that film still has over digital is the way that the highlights roll off. With digital there is a sudden dramatic transition from bright light to blown out highlights. With film the transition is finely graduated. Ironically this is the perfect medium for the current trend in wedding photography to ‘blow the highlights’. Yet, in the days of film, very few photographers actually did this purposely in the particular genre (obviously there is still some complication in achieving the film transition when digitising the film, but in actual traditional wet printing, the graduated transition was kept - this is probably one of the reasons why Ansel Adams’ and Bradford Washburn’s large prints look almost three-dimensional when viewed in person rather than on a computer screen).

Finally, why do we wear vintage watches? Why bother with an analogue face when an iPhone’s clock will do? Why do we spend so much money on archaic Swiss movement? Like old watches, there is something inherently beautiful in old cameras. I have a cupboard of them behind me as I type this. Old Nikon’s and Voightlanders vie for space next to a Rollei and Yashicaflex. A not so old Bronica ETRs waits, film loaded, for the next portrait I will be shooting on it. Working an old camera feel different to shooting a digital camera. There is a more sedate and purposeful movement when adjusting the settings. Each frame is considered and more deliberate (well it has to be as every press of the shutter literally costs money). Along with this deliberate and careful use of the camera comes a slightly different way of viewing the world. Digital is sometimes too easy. Part of it’s joy is that, like Garry Winograd, we are able to take pictures of things just to see what they look like as pictures. With film though, we veer away from the Winograd ‘snap-shot’ way of viewing the world, and start to look more carefully for those pictures. Picking up an old camera loaded with film is like changing gear. Not into a faster gear, but into a different mindset.

An evening doing this brought back memories...even the crawling into cupboard to load the roll 😜 #filmphotography #bulkloading #blackandwhite #photography #ilford #ilfordfp4plus
A post shared by Emil von Maltitz (@emilvonmaltitz) on Oct 25, 2016 at 10:55am PDT


Film is personal, where digital can be sterile and aloof. It’s probably just perception, but the slow-down in the technique and taking of the image makes the shot seem more personal. I can still pull out a photo that I shot on film from twenty years ago and remember the moment exactly (or so I imagine) when I look at the image. Not so with the digital images I have shot. Sure, there are that many more images, but it was only with digital that I had to have an image I created be pointed out to me, and I didn’t recognize it.

I am not alone in this. Shooting film seems to be becoming trendy, if not necessarily popular again. In one month three new films have been announced. Well, not really new films - more that they are old films being reintroduced to the market. One of them, Kodak Ektachome, is even a transparency film (not that it is likely to reignite E6 processing in South Africa sadly). Film photography will never again have the same market saturation that it had in the 90’s just before it was slayed by digital photography. So, film isn’t going to disappear for a while yet. Thank goodness, Film is not better or worse than digital, it is just different. There is a different way to shooting with it, and it produces a different look if you want it to (digital and film output can be made to look interchangeable in skilled hands, but it doesn’t negate that you have to actually shoot them differently to start with). I love film photography. For different reasons I also love digital. The abilities of digital photography are extraordinary! There is something that digital cannot reproduce though. The feeling of amazement as you watch your print develop under the red light of a darkroom. The sense of wonder as you look through a loupe at a large format transparency on a light table. The indescribable sense of exhilaration when the shutter clunks down and you know, you absolutely know without having seen the image, as you clutch that rewound canister of film in your hand, that you nailed it!