Johannesburg - A View From The Top 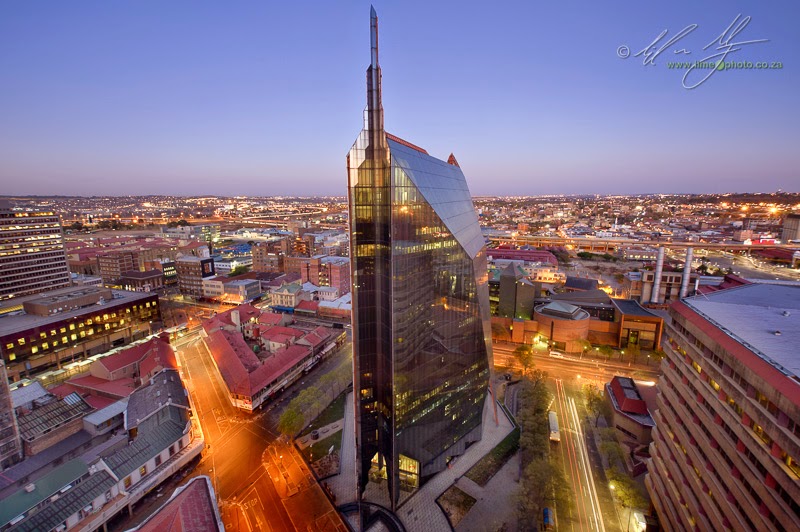 I was recently up in Johannesburg to finish a project for a client and took the opportunity to visit a friend living in the CBD of the city. For many people the city of Johannesburg is synonymous with unchequed rampant crime, squalor and poverty. Those with the means travel in and out as fast possible and only exit their vehicles once they are within the secured confines of a parking building. As an outsider to the city I too used to this was the case until I completed a project for Standard Bank in 2010.

In reality, Johannesburg is a fast rejuvenating urban location that is becoming a signature space in what is really a New South Africa. It's one of the few places I have visited where cosmopolitanism is literally the norm. In some ways it makes me think of New York's Tribeca which went from dilapidated to one of the most sought after addresses in the city. This is not the gangster's paradise that we make it out to be (although neither is is a safe place that you can walk around at all hour's in...maybe one day it will be).

On to the photography though. The above image is of one of the South African bank's headquarters. I have to say that I am quite taken by its architecture and relished the opportunity to photograph it from the roof of the building that my friend lives in. The image is a combination of 4 exposures that were blended using luminosity masks. It was taken a short while before dawn.

Another interesting sighting that I came across was that of Nelson Mandela's official vehicle, an armour-plated, bullet-proof Mercedes Gerlandewagen parked in forlornly in a parkade a short way from the ANC's Luthuli House. It seemed sad looking at this vehicle which to all intents and purposes should be in a museum rather than rotting forgotten in a parking building. Several passers-by have written 'we miss you Tata' and 'we love you Madiba' in the layered dust that has accumulated on the vehicle. No doubt it will stay there for quite some time as it is unlikely that the parking building owners would move the vehicle without the say-so of the ANC.

I was up in the city though to finish a long-standing project with a client. So it wasn't the city, or old cars that I was to photograph. Instead I found myself at Sun City in the North and the edge of the Pilansberg to photograph glass balustrades and doors. One of the things I love about the job is the fact that I do occasionally get to see and do a little more than the job describes. I'm looking forward to another roof top view of the City of Gold as it so happens...