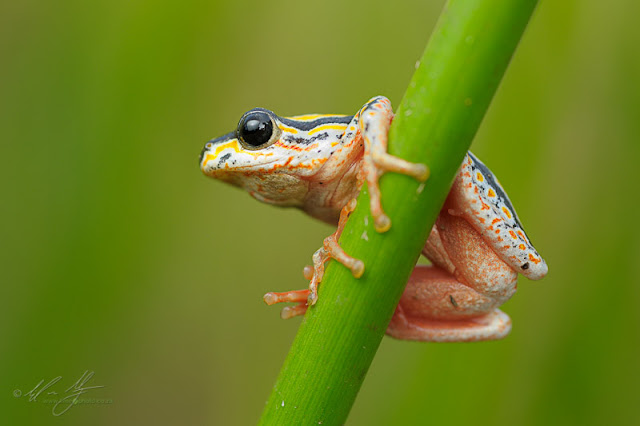 Off the bat I'm going to state - and this is important - I am a HUGE fan of low ISO work. When you are wanting clarity, acuity and the best possible pixels with which to work base ISO (i.e. the lowest ISO on your camera, disregarding Nikon's 'Lo' settings) is the best possible place to start. BUT, photographic exposure is always, always, about compromise. It is simply impossible to have a fast shutter speed, tiny aperture and zero noise all on the same exposure (unless you have the sun strapped to your shoulder, which is unlikely unless you are the Egyptian God Ra). So there has to be some sort of compromise somewhere.

Click through to continue reading
Readers who are familiar with my macro photography know that I work with flash a lot. In fact most of the time that I have the macro lens bolted onto the camera there is going to be at least one, often two flashes in the setup somewhere. So here's the basic premise then: Aperture controls how much of that flash light falls on the subject as well as the all-important depth of field. Shutter controls movement and how much ambient light is in the scene. ISO...ah, this is where it gets a tad complicated. ISO is how I balance my ambient, flash and depth of field.

If you read Joe McNally or David Hobby you'll know that the starting point in a portrait shoot with lights is often to kill the ambient and then build from there. Basically this means to select a shutter speed that falls within the flash sync speed (usually 1/250th sec) but which completely underexposes the background. After this you start to light your subject and the ambient has no effect on the subject. If you need to add light in the background either drag your shutter or light it [the background]. Okay, this is putting it rather simplistically, but that's basically the workflow. The problem with opening up ISO is that it introduces noise into the shadows. Otherwise this is also an option when you are wanting to introduce ambient.

Macro photography adds the complication of depth of field. There is none. When you are photographing an ant you need tiny apertures just to get half the body in focus, let alone the whole insect (see my article on this here). But, tiny apertures mean very slow shutter speed (which of course is compounded by the fact that in macro photography you are usually lying on your stomach in the mud under a shady bush). Now of course we could simply kill the ambient and throw the background into a complete pit of darkness. Then every macro image would look identical - not exactly creative then. 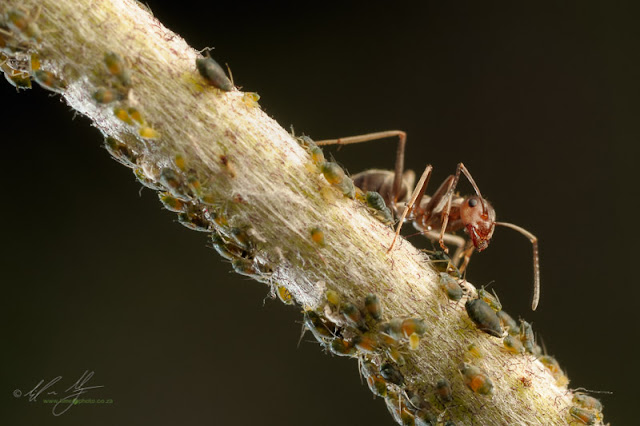 If we look at the ant image above, the settings were 1/125th sec, f29 on ISO 320. There's a hint of colour in the background which gives us the feeling that the image could be under natural lighting conditions (if there's a giveaway that it's a flash shot it's the rim light on the bottom of the stalk rather than the softer light on the ant). even at f29 the whole of the ant is not in focus, hence why we need tiny apertures. Without the flash and without and with low ISO this would simply have been a black canvas.
Step one, light the subject. In this case a strobe in a softbox to camera right and a bare strobe camera left behind the subject. I know that I can't move my shutter speed around much as I would likely introduce camera shake  (which is all the more pronounced at 1:1 magnification) if I want any ambient light in the shot. I can't open up aperture as this will destroy any dof that I've managed to wring out at f29. So the only option I have is to open the ISO. I'm doing all of this in manual as the exposure meter would be having a meltdown by this stage. If I up the ISO, tone down the flash a little (which is also in manual as I find that i-TTL, which works great on large subjects like human models, works abysmally with tiny subjects like ants and aphids).

The frog shot that oped this piece had settings of 1/160th sec at f8 on ISO 200. A very different feel this time. Because it was shot when there was plenty of ambient light I didn't need to open up the ISO much. The fact that it was on ISO 200 is due to needing a slightly faster shutter speed. ISO 100 would have meant the potential for some blur (again, holding a D3 body and macro lens with a SB-800 in a softbox cantilevered out on a Wimberley flash bracket means you are holding over 3kg of weight, usually while standing precariously over something). If I'd opted for more dof I would have needed some more oomph from the flash as well as to up the ISO. 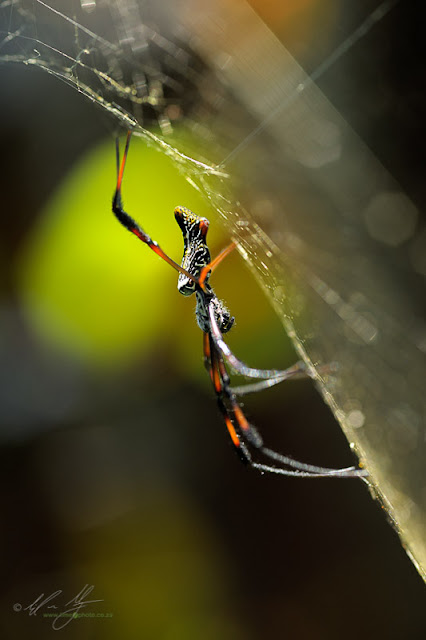 The last shot of the spider to the left is an example of no flash (surprise). Settings were 1/60th sec at f5.6 on ISO 320. I like ISO 320 on the D3x. I've found it gives me that touch more speed in the shutter without bucketloads of noise. ISO 400 is noticeably noisier in my opinion. The image looks like there was flash because of the background. There was dappled light falling on the spider and web, which is what drew me to the image. There was bright sunlight on foliage behind the spider which is what gave the image punch.

The moral of this whole story is that we can use ISO to introduce background ambient light without compromising our depth of field or shutter speed. The thing about ISO is that when their is decent light, noise isn't that much of a problem. It's only when we are trying to shoot in the near dark and expect it to look like daylight that high ISO is problematic. Admittedly none of these images were shot higher than 400 ISO. That's because I know that above 400 on my D3x is dangerous territory for image quality. On my D700 I'd happily do the same at ISO 800. I'm told that with the newer D3s, D4 and D800 one can use ISO 1250-1600 with little fear of noise in these particular scenarios. ISO is the balancer. It allows me to blend depth of field and shutter speed in a number of situations where normally we would have ended up with a black background. Sometimes the background really is visually important.
Posted by Emil von Maltitz at 9:03 AM