Taking Over the Boardroom 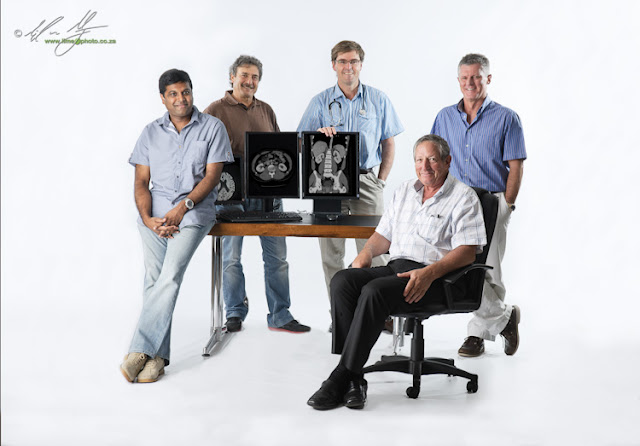 A short while ago I was busy shooting a series of conceptual images for a radiology firm in Durban. Some readers might remember the 'Building the Shot' post where I photographed the company's drivers in front of their vehicles. Unlike the driver shoot I needed to try and do this in a single capture. The concept behind the image was to have a clean shot of a group of doctors looking relatively informal with monitors displaying scans and x-rays. The idea was to show the friendliness and approachability of the doctors (the irony of course is you hardly ever see the doctors) while also showing off the technology that is now used, rather than the old lightbox and x-ray setup.

So for the shoot itself we commandeered the boardroom of one of the city hospitals where the partners of the practice would be having their monthly board meeting. We arrived well before the doctors to setup the space, reign general chaos down on the actual boardroom and test out the lights. 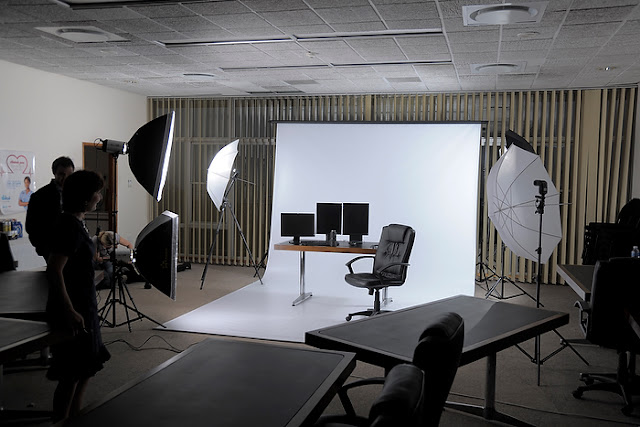 By general chaos I mean that the orderly room was shifted around to make space for the white seamless backdrop that I brought with me. In hindsight I'd probably light this differently, but I was also constrained by the equipment that myself and my assistant (Claire) own between the two of us. I wanted key light to come from the left and have a definite shadow on the right. I also wanted a bit of rim from the right rear. I also needed to light up the backdrop in order to keep it white.

I ended up pushing light through two 300ws lights on the left, both soft-boxed to try and create a wall of light - similar I guess to a strip light but broader. Ideally I would have preferred either a big parabolic reflector or a larger softbox with grid. Didn't have em so couldn't use em. Background was lit through two strobes at 45 degrees shooting behind the doctors. Because they were shot through shoot-through brollies there was some spill, but I didn't mind this as it contributed ever so slightly to the rim light. Rim was provided by another strobe in a white reflector. The lighting was crude by David Hobby standards, but it did work. Above is the setup and below is the image before going into post. 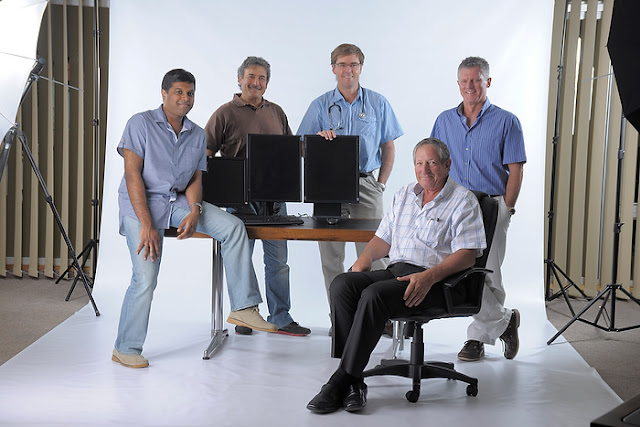 You'll notice there are a couple of changes in the poses. Ultimately I did have to use multiple images as the ideal pose for each doctor weren't all in the same capture. Again, I was chasing the clock as we were given literally 15 minutes to shoot the group for the client brief as well as a second with all the partners in frame. The second shot was tricky in that some of the doctor's would walk in through the boardroom, see the lights and literally wheel around and head straight out again (I was later told that some of them sat in the foyer coffee shot until they saw Claire and myself walking through the hospital exit - talk about camera shy!)

The final tweak was adding the scans. To get them looking a little more authentic I actually found myself adding noise to the scans once they were placed using layers and masking. The doctor images were shot on a D3x, but still the scans seemed too 'clean'. Lowering the opacity of the scans also helped get them to brightness level that seemed more natural. An interesting shoot and one I had to nudge the client towards. They liked it in the end. Always a relief!
Posted by Emil von Maltitz at 2:49 PM