Yesterday I found myself staring eyeball to eyeball with a surly cow. Usually this isn't too much of a problem, but when my knee is resting neatly in a cow pat and said surly cow keeps dropping her head and making aggressive shifting movements towards me I start to wonder why I'm sitting in a small fenced in field with a smelly, albeit grassy, turd oozing through my trouser knee. 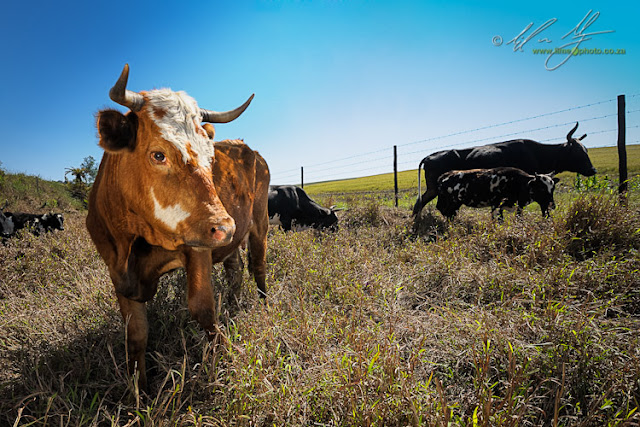 The brief was to show a cattle fence that has been erected by one of my clients as a rural development scheme to assist a government/private funded (think land reform) sugar cane farm way up in the hilly region of the interior Kwazulu-Natal. Easy enough really, except once we got there the beautiful morning light had turned to a harsh white light and all the sugarcane which I had been instructed to include in the images had been harvested already.

So Lindani, who was accompanying me as guide from the client in question, jumped into the small enclosure and had to herd the cattle to one end of the field where at least we could have some cane in the distant background. In itself this wasn't too difficult save for a few obstinate cows that seemed considerably jumpier than I remember the saturnine but dull-witted bovine of my youth (my grandparent's and father were farmers so I spent a fair share of my youth chasing cows for fun on a farm...I'm from the Free State, what can I say?) Lindani only got warned off with a small chase twice I think. Oh, and had to circle the field twice as well. He didn't really sign on for this when he agreed to come up to the area with me.

At any rate we managed to cajole them to the necessary end of the field which is when I found myself kneeling low down in front of the grumpiest of the group with a flash (in softbox - gotta make the models look beautiful) precariously balanced at the end of my left arm while I tried to hold the camera, focus and shoot with the right. I think the kneeling down in front of the cow confused her grass addled brain somewhat as the aggression did seem to dissipate marginally.

So, crappy light, but we seemed to get the shot that we were looking for. Next time I'll make sure to be out at first light (which means a two hour drive in the dark admittedly). This will of course means that I'll be cajoling whoever ends up accompanying me to site rather than the bovine models themselves. Ah, but it is good to be a photographer!

Posted by Emil von Maltitz at 8:10 AM