I've been doing quite a few commercial projects lately where it has been necessary to 'build' the image. Building the image has two connotations to me. The one is to keep adding elements to a created setup until everything just hums and the image comes together. This is how the vast majority of professionals create an image. Some lucky, extraordinarily talented few manage to do it in the first shot, but most grind on at an idea until everything just comes together. 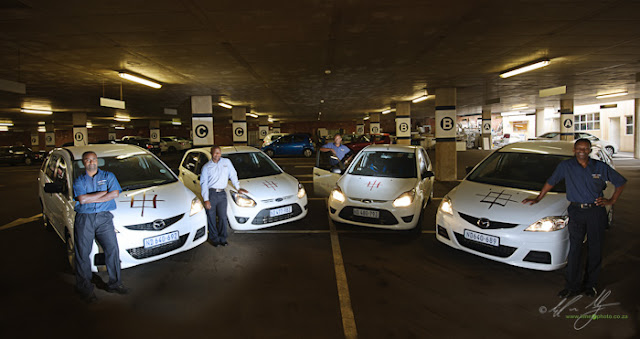 Building the shot can entail getting the props right, the pose perfect and of course the lights in the right place. Herein lies the point of today's post. Sometimes building the shot requires more than the usual buildup of elements so that that click of the camera can create something special. Sometimes we need to take multiple elements and put them together in a single shot.


I have recently finished a full series of shoots for the Kwazulu-Natal based radiology department, Lake Smit and Partners. One of the images that was required was of some of the vehicle fleet that is used for transporting patients. My original idea was to try and shoot the image at dusk using strobes to light up the vehicles and their drivers. Problems arose with transport schedules, usage of the hospital parking area and the simple fact that we couldn't get enough of the drivers together after hours to be able to create this shot.

Plan B then. We opted to shoot the drivers and some of the vehicles first thing in the morning in the undercover parking lot of St Augustine's Hospital. The hope was that the lot would be empty, which it was...sort of. Next, I scavenged a wooden cable roll that allowed me to raise my tripod and camera above the drivers and their cars. Then, using a single strobe (A Nikon Sb-800 manually fired) I lit each of the individual drivers with a single burst of flash (corresponding to my yelled instructions to somebody to hit the trigger of my cable release). The final shot was a seriously underexposed image to be used as a background for the lit vehicles and drivers. perfect it is not and there are a few niggles that I have with the final image. But, it does prove that a single strobe and a build-up of exposures can create quite an interesting and eye-catching result.