March Thanda Workshop and a tip on group photos

So the Cyclone Irene blew in and blew out and caused a few hiccups along it's progress down the east coast of  South Africa. In the end it was a bit of a non-event for many people who were expecting storms along the lines of those felt during Demoina in 1984. In the province 5 people lost their lives...almost all of them while trying to cross swollen rivers. But, for most people it was one big rain storm that lashed the coast with buckets of water. So it meant that the usually dry Thanda Game Reserve was somewhat wetter when I arrived on Monday morning. 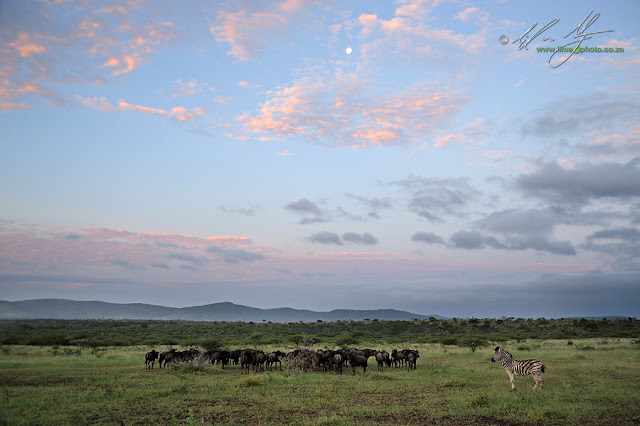 The African sun did it's work though, and by Tuesday morning game drives were out in full force once more, seeking out some slightly damp mammalian subjects. Due to the all the rain, slightings were down considering that there was water everywhere (which is great for the reserve, but ironically they still need more, despite almost 170ml falling in less than a day). The latest addition to the reserve, a large male lion brought from Shamwari Game Reserve no doubt has had a rough month what with the weather and the sudden change in scenery. 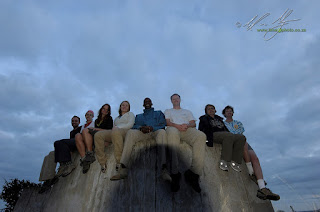 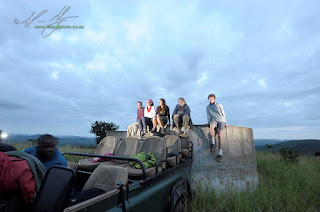 One of the things that I regularly do is capture a group photograph of the workshop photographers (usually without me in it, but sometimes with). The hardest thing about this is trying to come up with a new idea each time. Here's the process for this one: We were out on King's Land for a sunset shoot, for which sun decided not to keep it's appointment. Still, the light was interesting and the clouds looked pretty cool (as can be seen from the panoramic shot of our new guide Simo standing on the edge of one of the water tanks at Twin Drum on King's Land). Once everybody was finished with their shots I quickly got them all onto the lip of one of the water tanks via the game viewer, which I promptly removed from the shot while they all yelled at me how narrow the edge of the dam was. I had set up two strobes, an SB600 and SB800 each cable-tied to a tripod and facing in at about 45 degrees. I wasn't really going for intricate lighting. all I wanted was relatively full lighting to overpower the ambient - which I got. So ambient was underexposed by about 1.5 stops, maybe 2, while the flashes were set to 1/2 manual and triggered via CLS (and the pop-up flash of my D700). I kept the aperture pretty wide at f5.6 and set ISO to 400 (didn't want to tax the small flashes as they were set away a little from the group themselves as I wanted the light to have a longer fall-off. 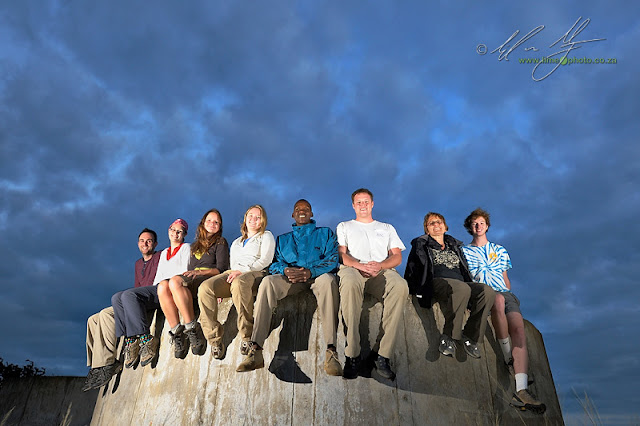 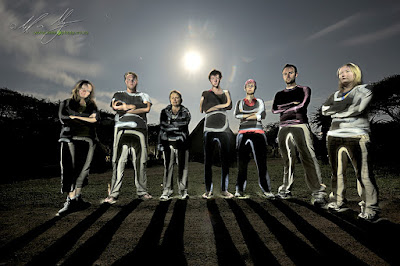 Group shots need to be more interesting than the usual, 'stand and say cheese' shot that seems obligatory. Another group shot had us doing the usual painting with light which I love. Problem was that the moon was so bright that it practically made the sky turn into daylight with any particularly long exposures. I duffed this shot as I usually take my time to paint, but this time rushed it as I didn't want the moon to blow out too much (I also dropped the aperture to f11 at 100ISO in an attempt to keep the ambient dark while still allowing enough open aperture to effectively paint - not my finest work but it still looks pretty cool). Using the surroundings like this is one way to make a group shot stand out. Getting the lighting a little more interesting than looking straight into the sun (as the old film canister boxes used to recommend, paraphrased, "set the camera to f16 at 1/125 second with the sun behind you"). It doesn't have to be complex, just different.  Using the frame of a door is a great way to use the surroundings (see this post or this post). Getting in low is another useful to change the viewpoint  from the ordinary (see this post). You can also get them to do something silly (such as in this post) or jump up in the air (such as here). Whatever you do keep a sense of fun in the shot and it's bound to succeed. Anything to steer away from the usual standing in a line shot that anybody with a cellphone camera can achieve.
Posted by Emil von Maltitz at 2:44 PM