Giving It The Finger - A Photoshop Layering Technique 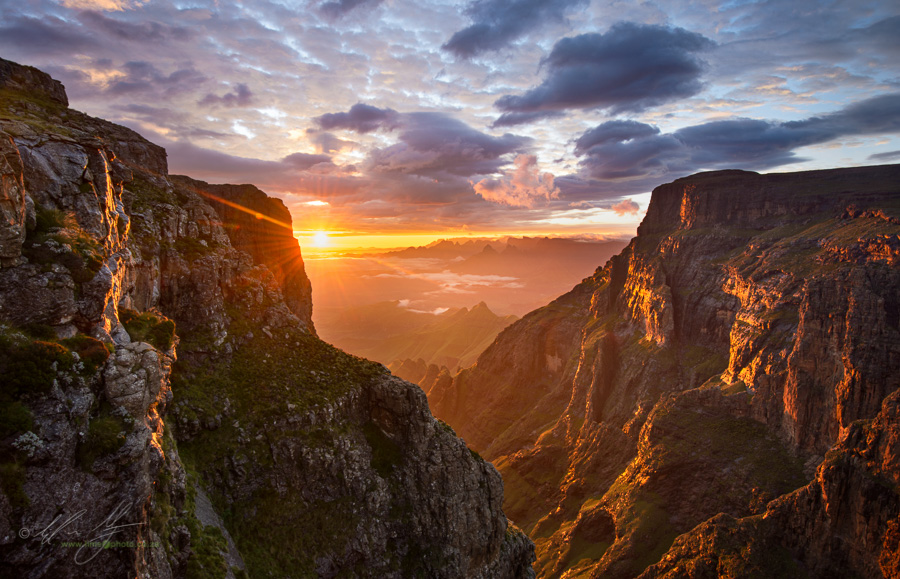 As much as I am a fan of the single capture approach to image-making, there are times that the opportunities that digital photography and multiple image capture offer, open up a whole new realm of picture possibilities. I don't mean that Dali-esque images are possible - which they admittedly are - but that we are better able to create images that match our experience of the scene. A case in point is photographing into the sun. When we look into the sun we are able to take in a lot more of the scene's tones through our naked eyes than through any kind of camera, be it digital or film. A solution that has been used extensively by digital photographers, but also by film photographers of yore, is to shoot multiple frames as different exposures and then blend the images to create a result with a wider tonal range than is possible from a single frame capture. Than are other complexities than the tonal range though. A particular issue is that of flare. 'Giving it the finger' is my solution to this.

Not all flare is created equal. Sometimes we see flare in our images and deem it good. This is the kind of light flare that lends itself to an impression of closeness with the subject. Despite the fact that we never experience flare through our own eyes, the inclusion of it in an image can give the impression of immediacy; of actually being in the scene. It gives a sense of the real, and despite it being used artificially, gives the viewer the impression that the image is un-manipulated because of its inclusion. Then there is the ugly kind of lens flare. This is that streak of light that detracts from the scene. It's brightness and placement simply drags the viewer's attention away from the purpose of the image or worse, obliterates it in a contrast-less smear of bright colour.

Lens flare is caused when our lenses have light hitting the lens at at obtuse angle (It can occur with acute angles too, although to less of an extent, but is often hidden in the brightness of the actual light source). The light comes screaming through the front element and promptly starts shifting direction thanks to the glass / air interface. Glass isn’t perfect though and some of that light goes slightly off course, bouncing back off internal glass surfaces, creating reflections and loss of contrast. That oddly hexagonal shaped ball of light in the middle of the flare is actually the reflection of light bouncing off the aperture blades and then bouncing back again into the optical path of the lens. Dirty or scratched front elements as well as internal dust only serve to exacerbate the issue, making a nice clean line of flare into a smorgasbord of bright points that sometimes look like tiny halos or newton rings.

The solution is to keep your lenses spotlessly clean, always use a lens hood and don’t shoot into the sun. Ah, but maybe you want to shoot into the sun. Possibly your lenses are not quite as pristine as they used to be (mine are liberally internally coated in Namib dust and have the signs of scuffing on some of the front elements…the joys of using and abusing my equipment on a day to day basis). If this is the case Photoshop comes to the rescue so long as you give it the finger. By this I mean, shoot an extra frame where you obscure the light source with the tip of your finger. Since there is no point light source - since you have neatly obscured it with your finger - there is no flare or loss of contrast.  But, you do have a big ugly finger in your image. By layering images into Photoshop (or a similar graphics programme) you can mask out elements that you don’t want, to whit; the finger. Here’s how:

Step 1: Select the images that you are wanting to blend together, including the image that you covered the sun with your finger. If you would like you can do some basic editing in Lightroom on the layers. In this instance I knew which images were going to be used for which portions of the image, so I did some relatively subtle work on the images in Lightroom for this. i.e. I adjusted the clouds and sky slightly on the image that would be used for the sky, and adjusted the foreground on the images that would be used in the foreground. Importantly, remember that the image that includes your finger must have almost exactly the same develop settings as the image from which the flare is going to be removed. In my case I tweaked the white balance to be a touch warmer in the finger image so that it better matched the flared image.

Step 2: Once in Photoshop as layers (this is very easy if you used Lightroom; simply select images and right click>Edit In>Open As Layers In Photoshop), select the images in the layers by holding the Command (Control on a PC) button and clicking not eh layers until they are all highlighted blue, and then go to Edit>Auto-Align Layers (select Auto). This makes sure that any untoward movement between the frames is corrected. You may find a thin layer of transparent pixels around the edge of the image. This is just where the layer was shifted and can be cropped out later.

Step 3: Set up your layers according to preference. Personally I like to work with my sky layers first so tend to stack them at the top of the layer stack. I also find it useful to rename the layers so that I know where I am by looking at the layer stack directly.

Step 4: I started by building a black mask (hold the alt button down while clicking not the create layer mask icon - the small ‘Japanese flag’ at the bottom of the layers palette) onto my top ‘clear sky’ layer. Using a brush set to 30% opacity I then quickly painted in the area around the sun and along the sky that I wanted to darken slightly. I also feathered the brush work using the properties palette.

Step 5: Once I was happy with my sky around the sun, I clicked on the ‘Clouds’ layer. The easiest and quickest way to isolate the sky from the foreground is to use the lasso tool (shortcut key: L) and draw roughly around the sky. Once your selection is in place click on the ‘Create Layer Mask’ icon and a mask with the sky selection will automatically be created. It’s not going to look particularly natural as the edge is going to be very obvious. To blend the mask smoothly simply drag the feather slider over in the properties palette (make sure that the mask is selected before doing this though).

Step 6: Now comes the trick with the finger. The foreground image has some pretty strong flare evident in it. To minimise this all we need to do is replace the area with flare with the underlying layer where the finger has blocked the sun and therefore cut out the flare. You don’t have to be exact doing this. Since I use a Wacom tablet I don’t even worry about selections. Just build a normal white mask onto the flared layer (click the Create Layer Mask icon) and using black ink gently paint around the flare areas using a relatively low opacity (use a low opacity or flow and build up the ink rather than a high opacity which makes the blend very artificial looking). In this case I have actually left flare in the image as I want to give the impression of looking into the sun, but I make sure to improve the contrast where the flare has meant a loss of contrast.

With the flare now under control I have what I consider my base image from where I can do the rest of my edits. From the image below you can see that I continued with contrast adjustments, localised contrast sharpening and finally corrected some chromatic aberration and sharpened the image.

Taking an extra shot with your finger blocking the sun is a really simple, low tech, fix for a fairly complex problem. Layers and masks in Photoshop (or any layering programme such as Corel Paintshop Pro or the free Gimp) can easily deal with this. Just remember, if you are shooting into the sun, flare is likely to occur and one more exposure while giving it the finger is not going to slow you