The first image is taken from the escarpment edge just north of Castle Buttress looking towards Cathedral Peak. This is a very simple panoramic stitch using two horizontal images shot on an old Nikkor 24mm f2.8 Ais lens. Usually Photoshop actually struggles with 2 side by side images that aren't shot using a shift lens. It tries to warp the one image to get some kind of perspective. The long and short of it is that PS doesn't always work and I have to put a great deal of effort manually correcting issues.

Oh dear, the same was the case with PTGui. The upside though is that by spending a little time adding what the programme calls 'control points' and I was able to get a seamless stitch.

Where PTGui excels though is in multiple image stitches shot vertically (to be fair PS also does a better job at this). The above image of the Old Fire Lookout on Organ Pipes Pass is a 12 image stitch to take in the Milky Way. I didn't even need to put in control points for this panoramic. Each of the images was shot on a Nikkor 20mm f2.8 wide open (unintentionally wide open as the aperture blades were jammed). Apart from waiting for the pano to render there wasn't all that much work to do for this image. One minor correction needed to be made by reprocessing one of hte image to bring back some burnt highlights for the doorway, and then layer it and warp into position over the panoramic image in PS.

An interesting point for anyone trying out PTGui, is that occasionally PS does a better job of blending the images. In this situation, go through all the necessary pano building in PTGui, but export as a layered PSD document without blending the separate images. Open up in PS, highlight the layers and go to Edit>Auto-Blend Layer. PS seems to blend the awkward spots in the image a little better than PTGui. However, if you shoot with a panoramic head, PTGui doesn't have any problem at all. The image below just wouldn't line up properly. In frustration I finally brought it in to PS as mentioned above and the Auto Blend did 99% of the work and I just had to tweak one distant hill.

It wasn't all about panoramic images though. Below is a stacked star-trail image with total elapsed time of 72 minutes. Any longer in the frigid cold and I would have gone hyperthermic quite frankly (to be absolutely honest, most of this exposure was spent huddled in a sleeping bag inside the tent, while the howling wind angrily swatted at the flysheet). 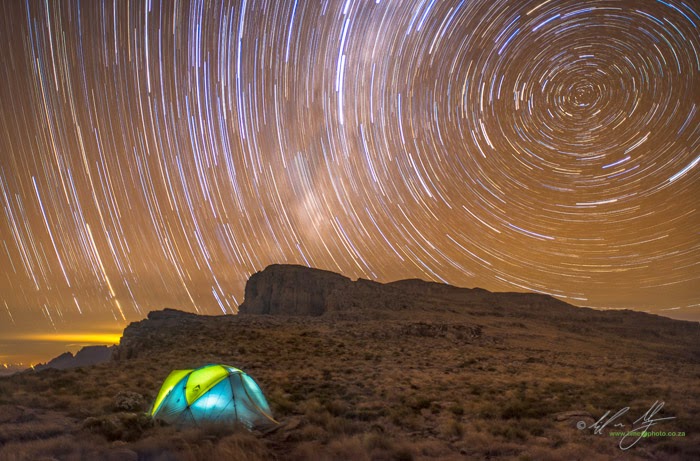 As I mentioned the primary purpose of the trip was to capture some timelapse imagery which I did with a Fujifilm XT-1. I'll hopefully be posting the results shortly. The hike itself was phenomenal. I was accompanied by the always impressive Nick van de Wiel of Tailor Made Safaris, and Simon Yiga, a long-standing friend who patiently waits for us to shoot and graciously (bemusedly?) signs model releases afterwards. Apart from a broken stove which meant for cold food throughout the hike (don't try cold pea and ham soup - it just isn't worth it) the few nights we spent shooting on and around Organ Pipes and Castle Buttress were phenomenal. It was with heavy hearts and heavier legs that we walked off the mountain and back to the reality below 3000m.