I have been wanting to take students to photograph Cathedral Peak from a particular vantage point for quite some time now. The vantage point in question is half way along the standard route to summit Cathedral in the Mdedelo Wilderness area of the Drakensberg (also known as Cathedral Peak National Park). This means for a rather early start in order to hike the 5 odd kilometres to get to a point where the Cathedral Peak range can be effectively viewed at right when the sunlight hits it first thing in the morning. This means starting to walk before 4 in the morning. Amazingly, apart from a few half-hearted grumbles, the photographers were all up for this. Game on!

Weather plays a large part in the posts I write about the Drakensberg. This particular workshop initially looked set to rank as one of the wettest of my career. It was bucketing rain across the entire Kwazulu-Natal province last week. At one point on Friday afternoon it began to look like a day lying in the bath would result in drier photographers. But the clouds broke and we were able to at least stretch legs for a short while.


The thing is that although I'm continually saying that bead weather makes for great images, there are times when the weather is just so dreary, so sodden, that even great images don't hold an appeal anymore to the drenched individual. But waiting does pay out and it did so with us, despite an early morning fruitless wait on Saturday (you can see the group waiting in vain for a spark of sunlight, or at least some visual drama). Ultimately we went back to get breakfast and were wildly delighted when a few hours later the clouds lifted, and stayed that way for the remainder of the weekend. 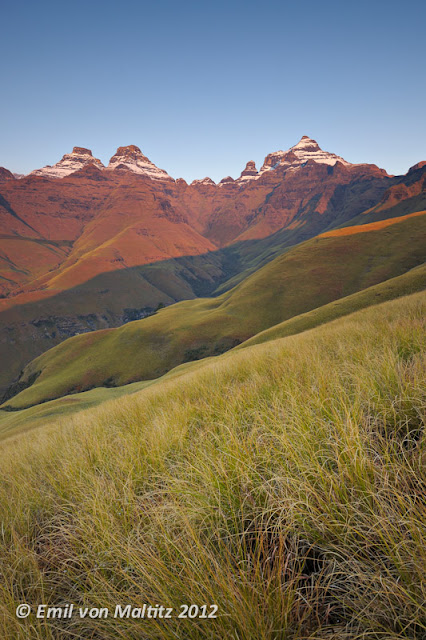 Which of course was why we were able to venture out in the darkness and climb a ridge when sensible people were still in bed. Which brings me to a complication we all experienced once we found ourselves somewhat higher than we started and the sun coming up over the horizon...there was no obvious foreground. One always hear's about ho good landscape images should create a sense of depth in what is essentially a two dimensional reproduction of a three dimensional reality. This is easy if there are interesting boulders in the foreground. But what happens when you are standing on a ridge and there is supposedly nothing.

Ah, regular readers of this blog will know that I might drone on about elements (I'm afraid they are right). Although a foreground isn't always necessary, this was a situation where I believe that it was. So use the grass. There is always a foreground! You're standing on it usually. In this case the angle of the slope created a series of angles lines that contributed to a sense of flow in the final image (or so I'd like to think). Get down low and look for the elements that create that foreground. It doesn't have to be the most interesting rock or flower in the vicinity. It just needs to talk to the background in some way.

Overall I believe we had an absolutely spectacular weekend in the Berg. It started wet and ended up glorious and warm. You can also read about the trip on Nick van der Wiel's blog as he joined me for the trip. A hearty thank you to the wonderful group that accompanied us to the mountains this month. It was a pleasure spending time in the mountains with you. 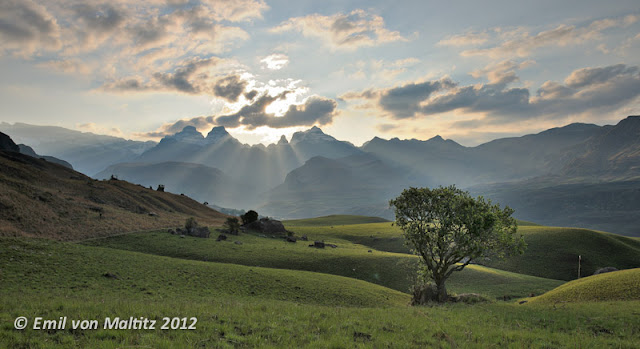