Okay, so I am fortuitously placed to be a part of the United Nations Congress of Parties, Durban 2011 climate talks. By fortuitously placed I mean that I live in Durban and people are desperate for photographers. So this means I spent the weekend shooting one of the side events to the full on COP17 negotiations. No I didn't make it in as a photographer to the main sessions, but in a way I'm relieved. Instead I ended up being the official photog to the Standard Bank hosted IETA conference.

The thing about event photography is that most of the time you are shooting business suit clad men and women looking dour-faced at times, disinterested at others. The goal is to make the proceedings look lively, interesting and above all, good. Not an easy thing to do when the height of lighting sophistication from some venues is a panel of halogen down-lights. Of course I speak from the highly biased point of view of an events photographer, NOT A JOURNALIST!! The journalist's job is convey THEIR version, or interpretation of the truth as they see it. An event's photographer is a hired gun in much the same way as an advertorial photographer is. You are paid to cover the event for publicity purposes, and if that happens to be propaganda for the client, so be it (we can have an ethical debate on this at another point...the basic premise being that if you have issues with the organizing party, then don't shoot for them...duh). If you agree with the party, then by all means accept the gig and enjoy the talks.

To the task at hand and the horrible down-lighting. For the most part I find shooting available light is often the best way to get interesting shots, particularly when you are using a long telephoto lens. The problem comes with trying to get more than just the usual shadows and here the advantages of being the event photographer start to play a hand...or in this case two light stands, one umbrella and three flashes play a hand. In other words, because I have relative carte blanche I am able to set up auxiliary lighting, so long as it doesn't interfere with the proceedings themselves.


For the first day I used solely available light. So the images of Minister Manuel and the big shot meeting were all done on high ISO on my D700. Thing is, this was on purpose. As an event photographer you don't necessarily want to interrupt certain meetings with flash bursts going off continuously (a caveat to this follows in a moment), particularly on the first day of the shoot if there are multiple days. 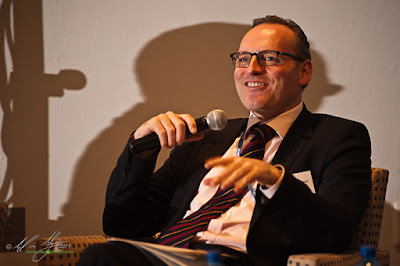 The first two images show no flash at all, only pure ambient light shots on high ISO (1600 or 3200 on the D700, 640 on the D3x). The second day's shots were then augmented with flash light. Again the advantage of being the official event photog is that people get used to seeing you around. On day one where a stray flash burst will irritate the speakers, day 2 and beyond they become almost nonchalant towards the flash (although always chat to the session's chairperson before banging away with flash). I've also noticed that not being journalist actually gets participants to open up towards me as the photog. They seem almost less reticent to be photographed. Incidentally the third image shows one of the shots with a bare strobe coming from the opposit side of the room so that I could get some interesting short lighting effects on the speakers.

The basic setup for the large room was to have a strobe placed high and in the center of the room facing towards the speakers and softened by shooting through a shoot-through brolly. This flooded the room with soft light and could be used on it's own if desired. Then on opposite sides of the room I had two more straight strobes (i.e. no modifiers) pointed towards the speakers but slightly feathered inwards. Using the Phottix Stratos II and setting the three strobes into their own group each, I was able to choose one, two or all three flashes at any given time. A little bit of trial and error just prior to the session helped me calculate the flash outputs and the basic settings that I would be using. 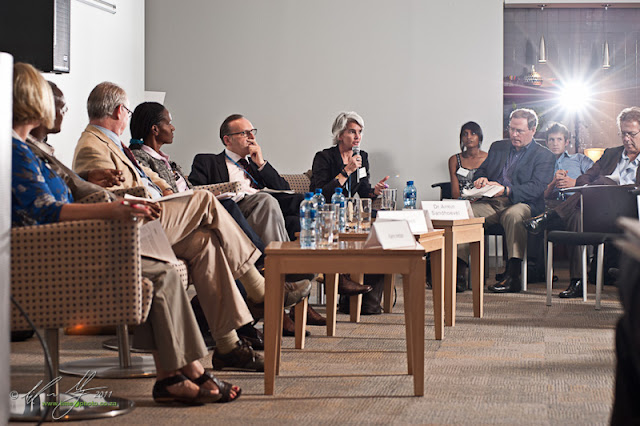 You can see how the opposing flash was used in the above shot. This meant that I could easily create either a rim light or short lighting depending on my position vis-a-vis the flash and the speaker. Definitely more interesting than the standard bog ordinary shot of a talking head. 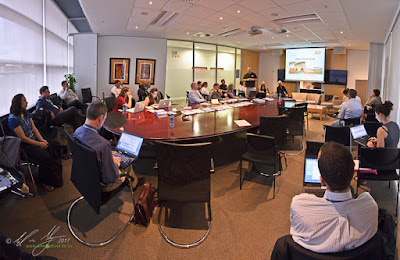 Another great way of creating interesting shots is to do panoramic sweep of the room. Thanks to Adobe's photomerge, which has gotten increasingly better with each of the Photoshop iterations, panoramics are really easy. No you don't need a special head. The shot here was done with a 16mm lens on the vertical axis in a relatively small boardroom. It's not fine art, but it works for the task in hand.

Lastly there is the ubiquitous group shot. Shudder. Another setup of a line of individuals facing the camera. Sometimes this is admittedly necessary, but other times people want to have something that's a little different. Do the standard shot, then get people to do something different. You don't necessarily have to get corporate jumping on the spot as if they are at a wedding lampooning for the photographer, but certainly get them to do something different. In this case I popped a single strobe behind a shoot-through brolly on the ground, lay down on my back and shot the group as if they were upside down (at least that's what it'll look like in the viewfinder). Instant smile as the photographer, who everyone now knows because you have been hanging around for a while, looks like an idiot on the floor (or num-nuts as Joe McNally calls himself). 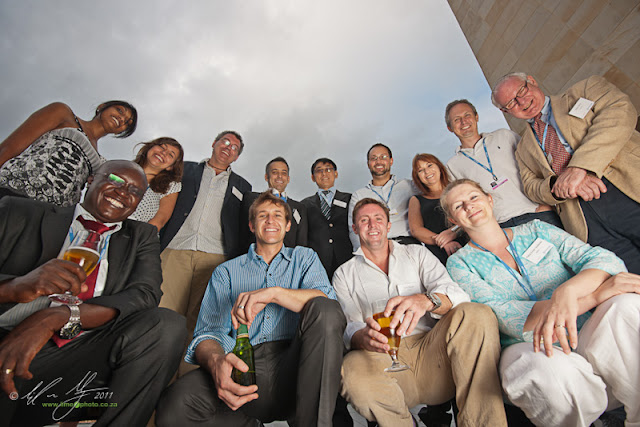 Like I said, it doesn't have to be high art, but if it's different, and if it's good, you will get a call back for future work!
Posted by Emil von Maltitz at 12:41 PM