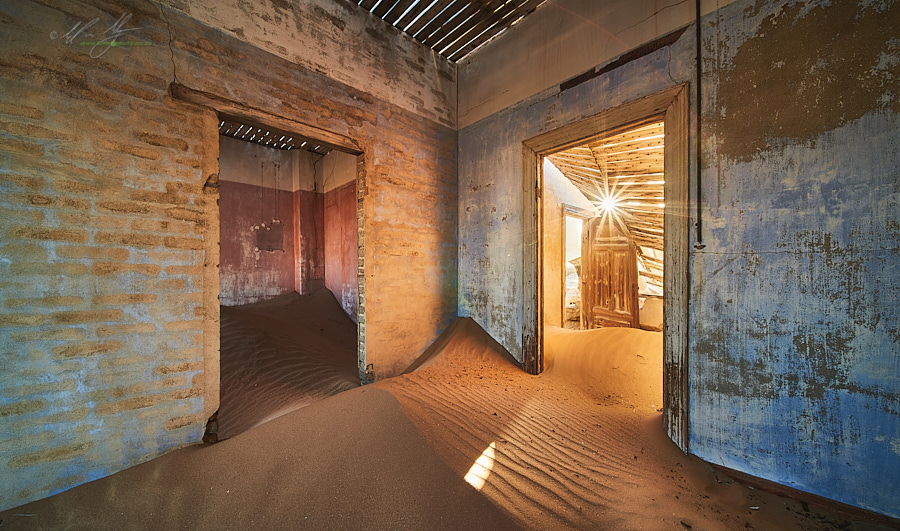 
A stumbling block that photographers encounter when they first start out creating images, is that they are often trying to recreate a three dimensional image - that which they are experiencing - onto a two dimensional plane - the photograph. So the trick is to create two dimensional images that have a sense of three dimensionality. As many discover, this is not actually that simple a task. It’s a task that is made harder by the fact that we have an arsenal of lenses to select from, which can confuse the situation for photographers as they as they start out.


Perspective distortion is the way that a subject changes shape or distorts based on the focal length of the lens in use, and the distance of the subject to the camera. Importantly, simply changing lenses doesn’t change perspective. It's the physical moving of the camera closer or further away from the subject that creates the perspective change in conjunction with the choice of lens. An example of how this would work on a building can be seen on the left in this moving graphic (obtained from Wikipedia)

One of the easiest ways to describe or see the effects of perspective distortion is to watch when it  is used in cinema during what is called a ‘dolly zoom’. This is a cinematic effect that was first used in Alfred Hitchcock’s ‘Vertigo’. Cameraman Irmin Roberts worked out how to move the camera on a dolly while at the same time zooming the lens so that the subject remained the same size on screen. It’s been used for effect creating tension and a sense of scale in movies like ‘The Lord of The Rings, Jaws, Pulp Fiction, or a sense of entering an intimate setting from a broader context as in the film ‘Goodfellas’. That’s how it works on moving film, what about the effect with stills?

Photographers can use perspective distortion to emphasis relationships in creative ways. Kevin Carter’s Pulitzer Prize winning image of a Sudanese child with vulture in the background is a classic example of this. The vulture and the child appear much closer to each other than they really are due to something that many photographers refer to as ‘lens compression’. In truth it’s actually called ‘compression effect’ as the lens is only part of the distortion. The other, more important part, is the distance between the subject and the lens. At any rate, and to simplify things, if the camera is further away from the subject and a longer (telephoto) lens is used, the compression effect is prominent. If the camera is brought up close to the subject and a wide angle lens is used, ‘extension effect’ becomes visible. This is the opposite of of compression, and gives the sense that the objects in the frame are further apart in three-dimensional space than they are in reality.

To illustrate the effect I shot the famous ‘Blue Room’ in Namibia’s Kolmanskop with 4 prime lenses: A Voightlander 40mm f2, a Nikkor 24mm f2.8, a Zeiss Milvus 18mm f2.8 and a Laowa 12mm f2.8. All four lenses are considered wide angle lenses (although the 40mm is somewhere between wide and ‘normal’). I composed the classic shot that everyone shoots of the doorway, then changing lenses moved closer to the doorframe to approximate the same size of the door in the viewfinder. Even with such a small focal range, the perspective distortion is pronounced between each of the images.

To create a sense of depth and space, use a wide angle lens with the subject close to camera. If you need to isolate the subject from their background, or emphasise the scale of the background, try using a longer lens from further away, thereby compressing the perceived distance between the subject and background.

The Blue Room example is informative because it shows the effect of compression and expansion in an area that is no more than 10, maybe 12 metres in depth. The 40mm lens creates an impression of flattened space, such that the walls look far closer together than 10m from lens to the rear wall. The opposite is the extreme depth created by the 12mm Laowa lens, where the walls now ‘look’ like they are much further apart. Important for the overall composition though, is that there is a very different interpretation of the image from each of the different lenses.  The 40mm has a far more abtract look to it where the shapes are more important. The wide the lens, the more like a tunnel the image becomes, and the more expansive the space.

Ultimately, the choice of lens should be determined by the effect and 'feel' that the photographer is trying to create in the image. Remember that for perspective distortion to work optimally, it requires moving position AND focal length.

Images below for closer viewing (click to enlarge) with 40mm on the left and 12mm on the right.