The One Frog Workshop! 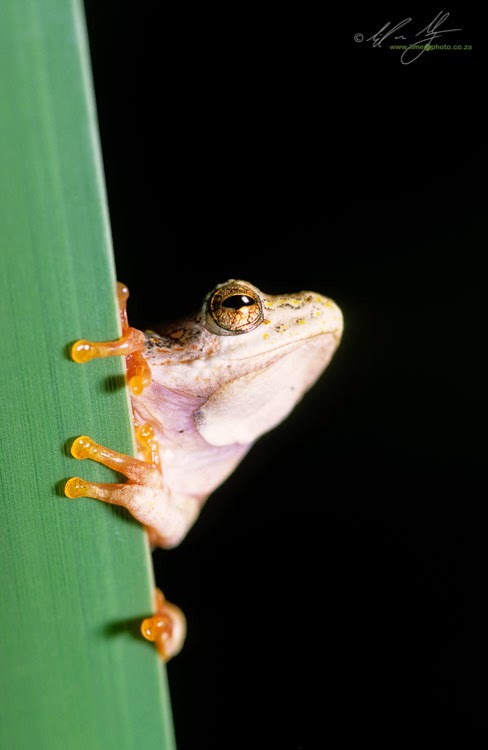 Photographing frogs is a lot fun! There's a reason a small painted reed frog adorns my business cards. It was photographed years ago on Fuji Velvia when I was still a student at Rhodes University. Ever since then, whenever I get the opportunity I try to find some little amphibians to photograph. Of course there are a couple of pifalls to photographing frogs that you learn about pretty quickly. This is how you overcome them:
Depth of Field

This has to be the first hurdle that photographers; the extraordinarily narrow depth of field that comes with a macro lens, or even just focusing close on a subject. If you look carefully at the images in this post there isn't a single one where hte depth of field is greater than the frog itself. As a rough rule of thumb expect to get close to the aperture's value in millimeters depth of field. So, f22 = 2.2mm Dof at 1:1 ratio. Try shooting with f5,6 to allow more light in and you essentially get half a millimeters Dof!

In some ways you can't completely get around the depth of field issue, but you can use it to your advantage. Isolating the frog from the background suddenly becomes very easy as seen in the example of the Painted Reed Frog below.This was the only frog that we found on the recent Limephoto Frog Photography Workshop (the extended dry spell in Kwazulu-Natal made frogging very difficult!) 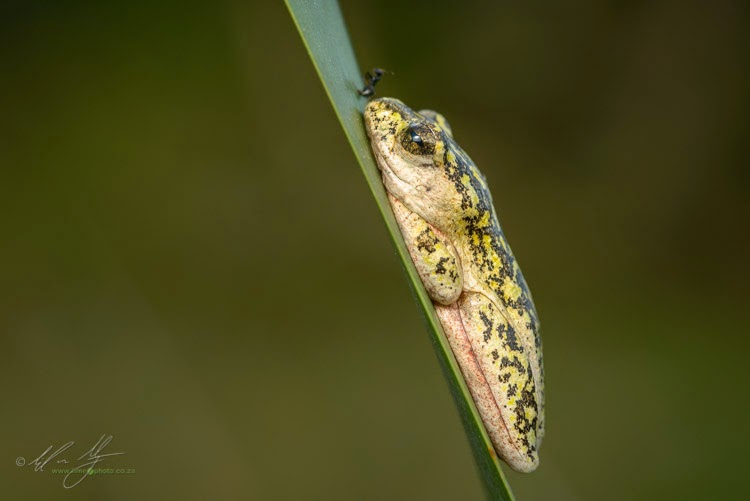 For a start, focus on the eye. Everything else is secondary. Make sure the eye is pin-sharp and you are more than half way to getting a decent shot. Then, if you are wanting to show as much of the frog as possible in focus, consider shooting in as near to profile as possible. Looking at the example above it's easy to be fooled into thinking that there was a greater depth of field than there really was because a fair amount of the frog is on the focus plane. As soon as you shoot head-on that illusion disappears as in the image of a Rain Frog below. You can also try focus stacking if you have enough images, but this is a complicated technique which doesn't always work perfectly. 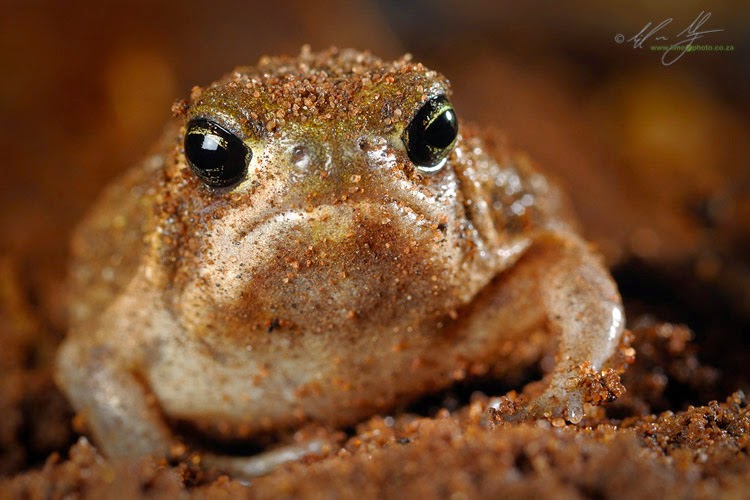 The next thing anyone photographing frogs stumbles into is the fact that there seems to be nowhere near enough light to be able to photograph them, let alone keep them sharp handheld. First you are using small apertures to try and get some Dof so this sucks up light. Then you are probably photography frogs at dusk when they are starting to get active which of course means the ambient light levels are low to start with. The simple fact is that you are going to have to get comfortable using flashguns, more than one preferably. I talk about lighting at length in this tutorial on lighting on the Limephoto website, so I won't go into too much depth here.

Essentially, what you need is a key light modified so that it looks nice and big (which = soft light) and a second rim or highlight light that can give three-dimensionality to the frog. This is particulalrly important when you are photographing at night as the background will go black completely. I personally use a Lastolite Apollo softbox on a Nikon Sb800. I hold the flash out away from the camera with a Wimberley Macro Arm (both the softbox and the macro arm can be made DIY if you like...I used a piece of aluminium rod and a home-made softbox for years).

Getting the Light Right 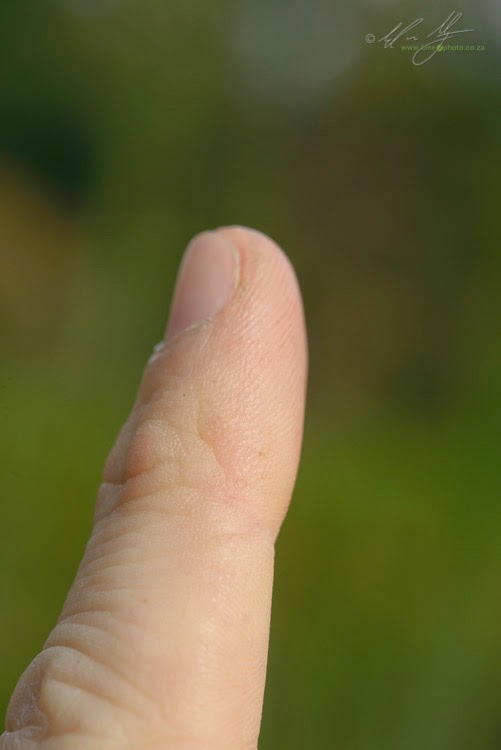 The next trick is sorting out your lighting before you disturb the frog. I simply photograph my finger until I get the light right. By right, I mean a combination of shutter speed, aperture, ISO and flash positioning and power.

Shutter Speed needs to be fast enough that there isn't excessive camera shake (good news is that the flash burst masks shaky hands somewhat), aperture small enough that there is discernible Dof where you need it, ISO set to allow some background light to filter into the image unless you want it pure black and lights so that you have the best lighting for the subject that you can orchestrate.

The last item regarding the lighting is the hardest part to get right, but also the most interesting. Working with a group helps in this regard as a partner can hold the flashes in the right position while you try to get composition and focus spot on. Last month's workshop group can be seen below sitting in the reeds of a dam at Pennington on the South Coast. Paul Greenway is acting as the voice-activated light stand while the others move around in the water to photograph our solitary frog. 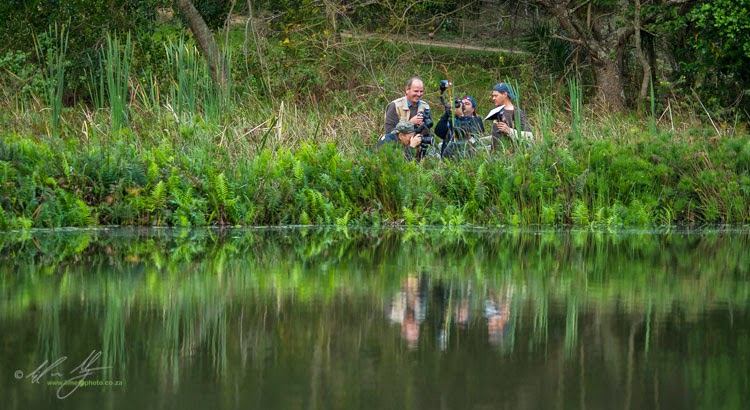 Which brings me to the difficulty of focusing. Several phenomenal autofocus macro lenses have come out recently and they all suck when it comes to autofocusing at close distance. Because the Dof is so extremely thin the AF sensors work overtime trying to keep the subject in focus. But, because the Dof is so thin, it will keep loosing focus and then search desperately trying to regain it. Meanwhile you are trying to handhold a heavy rig dead steady so that the focus doesn't get thrown out by your movement. It just isn't going to happen.

The best way, and as far as I know the only effective way to focus on small subjects like frogs (when handheld!) is to go into manual focus, set the lens where you want the magnification ratio to be (always indicated on true macro lenses) and then move your entire body gently back and forth to focus the image. The hit rate of sharp images will climb dramatically using this technique.

Don't Be Afraid To Get Wet

Lastly, there's the issue of finding the frogs. For this you are going to get wet. It's advisable to find out about bilharzia in the area before wading into the depths of a local dam or reservoir. Ticks and other biting critters also take a toll on the serious frog photographer. As it is, I contracted Lymes Disease photographing bullfrogs near the Adirondacks in the US in the late 1990's. This shouldn't put you off taking photographs of frogs though. Being careful makes up for a lot. 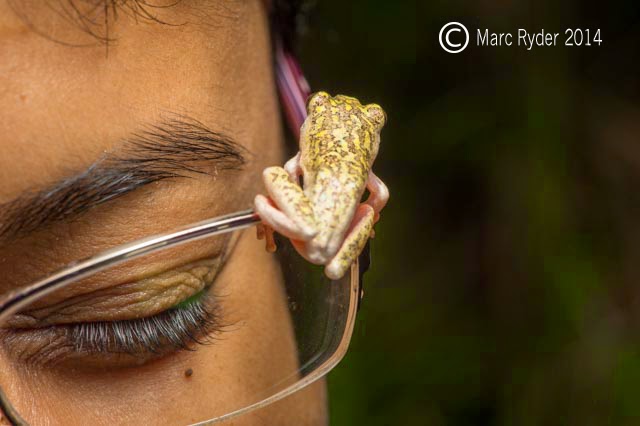 Frogs can also be handled quite easily (except poison dart frogs admittedly) so long as you are gentle and have wet hands! Dry hands can damage some frog species' skins which have a delicate moist membrane. Just be sure to have newly wet hands if you want to touch the frog. Of course this won't stop the frog from jumping on you if it feels like it.
This is meant to be an exhaustive essay on photographing frogs, but it does point out some of the complications of photographing the little guys. As barometers of the earth's health, frogs are a particularly important species. Best thing is you don't need a lens that costs the same as a car to photograph them and you'll probably find them if not in your own backyard, pretty close to it (you don't need to travel to the Masaai Mara to find them). 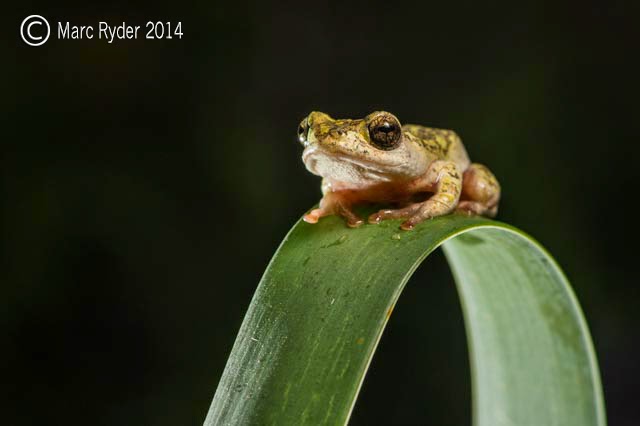 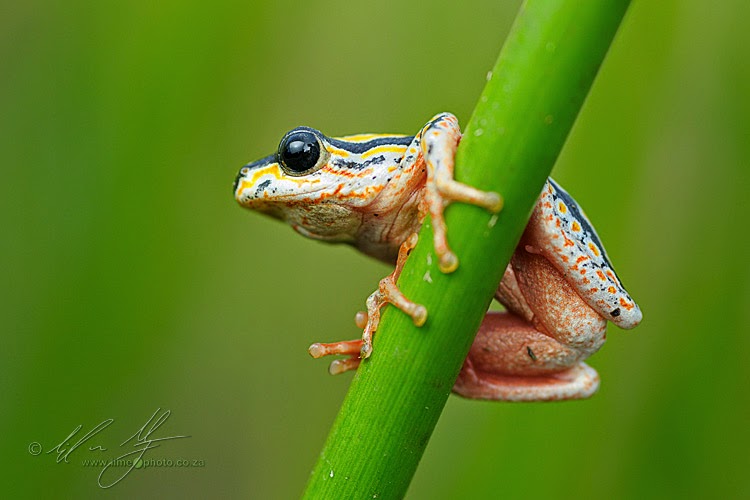