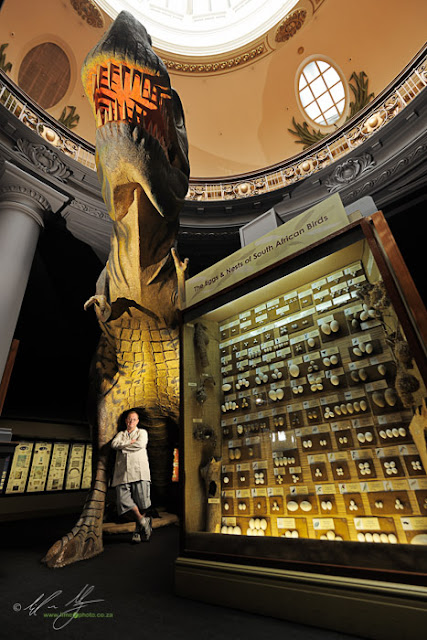 Two years back I spent a day doing some creative portraiture at the Durban Natural History museum which I wrote about here. Turned out they liked the work that I did, so was invited back again, this time create some more images of the Director, Allison Ruiters and some of the Exhibitions Staff. Being a director of a large institution such as the museum meant we had to try and cram in as much shooting as possible in as short a period of time...naturally (not to mention the fact that state institutions - despite what critics would say - have rather limited budgets). Thankfully, shooting at the museum is always fun, with a wealth of 'things' to use in the imagery. 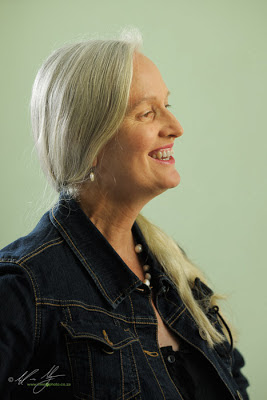 I started off with the exhibitions staff as we needed to get some clean head and shoulder images chat could be used for publications. I also find that starting with something simple like this gets some of hate tension out of the air. People often don't like being photographed. By doing a sort of introduction to the camera through a simple head and shoulders, it makes the interesting location work more fun for the sitters themselves. It seems to work at any rate. Also try to gauge the people you have to photograph. Often there is someone who really isn't shy of the camera. If they go first, it makes the whole process easier...and can also give you, the photographer, the needed stimulation to get the rest of the group excited.

Head and shoulders was nice and easy. We found a great big dirty window which I used as a lovely soft key light and then added a bit of side light to define them via a a single flash going through a shoot through brolly pointed almost toward the window. Very simple lighting made effective by the window itself. Done and dusted, then we were off to try and find something more interesting.

That wasn't so difficult considering the museum has a great big Tyrannosaurusrex in their main exhibition hall. I loved the way the T-Rex towered over everything they had in the hall, so asked one of the exhibitions staff to stand under the legs of the giant. I had My assistant Claire get in close with a 1/2 CTO warmed SB800 shooting through a 60x60cm pop up softbox. I also added a similarly gelled SB600 on a stand pointed up towards the Dinosaurs head. Without this accent light the Dino's head just fell into shadow. Getting low with a 16-35mm lens then gave the perspective of the giant towering over Andrew, our Exhibitions Officer.

Accent lighting is a great way to create a bit of story in the image. We did something similar with the staff in another hall where we used a gelled zoomed SB600 light on a vulture hanging from the ceiling while the same flash in softbox combo was used to light the staff members. This time round though, a third ungelled strobe, handheld by Claire, gave some rim to the person standing in front of the camera.

After a quick shoot with the Education Officer, Busi, we shot through to meet with the Director. One of the tricks to lighting, one which I'm still learning is to try and make the light look like it should be there. Oftentimes I'll make it obvious, such as with the T-Rex shot, but I wanted it to be a whole lot more subtle with Allison. In the next shot shot we had two lights firing, one acted as key, shooting through a white brolly. The other was a very light highlight on her hair. The key light was coming from more or less the same direction as some of the window light, but angled enough that it gave fill to the right hand side of her face which would have been in some shadow without the flash. The highlight flash is coming from exactly the same direction as the window light. The thing about window light is that it has a soft wrapping quality. This soft light doesn't necessarily leave a highlight on hte person's dark hair, making it look a little flat. By adding a strong directional light to that of the large swathe of window light we are able to do just that. 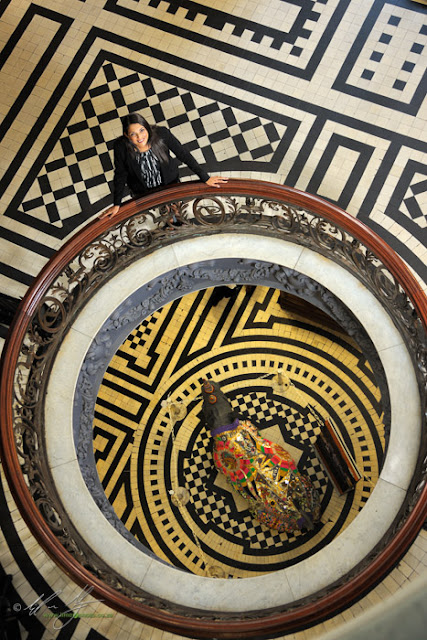 This final image (which was actually shot prior to the previous image) was another interesting play with lights. This little alcove is actually really dark. The only light is from the chandelier above. I wanted to give the impression that there is a window to the left of the frame behind the pillar (there is actually a very dark wooden door). There is also no space for anything like a light stand, or even a (as I hear it referred to) VAL or Voice Activated Light-stand i.e. assistant. So I popped a strobe attached to a radio trigger (Phottix Stratos II) into the corner angled up to try and bounce a light into the alcove. This worked, but created very strong shadow inside. The solution was to fire a strobe (this time held by a VAL) halfway between myself (with a tele lens) and Allison so that the VAL is just out of frame. Yes, there is the tell-take shadow to Allison's left. Were I to do this again I'd get that flash higher via a monopod or light boom. So, I'm not entirely happy with this shot, but considering the time constraints am happy enough. 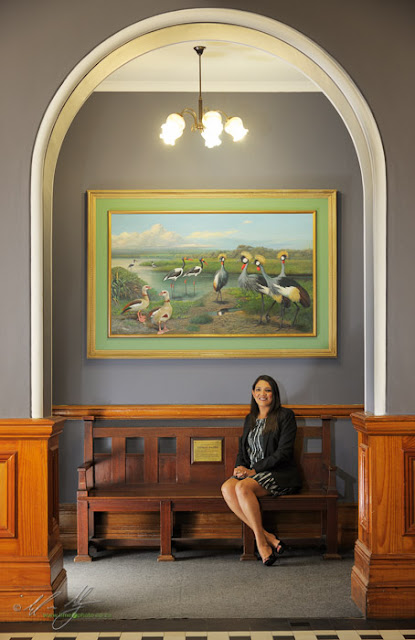 As ever, I loved shooting in the museum. I really enjoy the creative portrait shoots that this job affords and the fascinating people that I get to meet. And the museum is filled with interesting people and interesting things...enough to excite even the least creative of photographers.
Posted by Emil von Maltitz at 3:21 PM