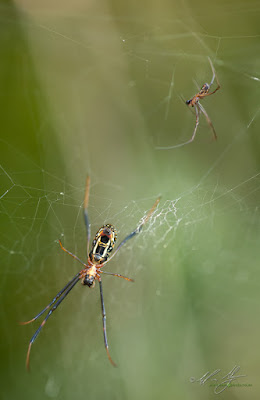 After another fantastic weekend in the Drakensberg with a dynamic and energetic group of photographers I’m left feeling amazed that what I do is still called work. Waking up this morning I wandered down to the Witsieshoek lodge to write this piece and wait for the others, and I saw the sun rising between two layers of cloud in the distance. Because of the cloud and the atmosphere the red orb seemed twice as large as one ordinarily sees. The Amphitheatre, standing almost aloof was facing the rising sun, seemed almost ethereal…maybe Tolkinesque, in its blue morning haze. This is work? Being a photographer has its downsides. There’s the almost incessant travel away from a young family (I am continuously amazed at how my eldest daughter seems to take my disappearances in her stride, almost as a way of life) and of course the drudgery of key-wording. But when you are faced with the splendor of the mountain and the chance to meet so many amazing people… Like I say, is this really work?

Martijn van Schaik, a member of African Impact was a guest with us last year March. His request this year as a staff member on the trip was that everything be as close to last year’s trip as possible – for his anniversary of the Berg. It was. I’ve added last year’s photo of the group looking out from the viewponi above the Witches to this year’s photo. It seems almost as if the images could have been taken a few minutes apart rather than the 12 months that do separate them. To say that the weather was similar would be an understatement. It was hauntingly the same, even adding the cloud wrapping round us as we made our way off the ladder and onto the escarpment. 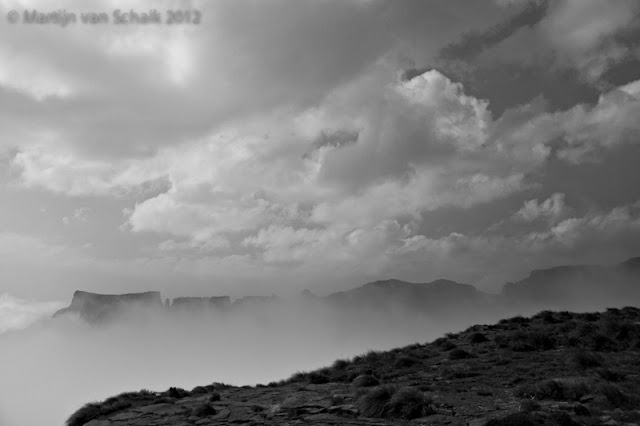 As a landscape photographer it is often easy to fall into the trap of over-previsualising the imagery we strive to create. I definitely fall foul of this, and I find that it becomes harder when I return to a place often. Pre-visualisation, as I often mention, is the attempt to see the final image in the mind’s eye before we press the shutter. It is the technical previsualisation of the scene that guides us as to how to expose for the image. What should the aperture be, how will I handle the shutter speed etc. Each of these technical decisions has an impact on the look of the final image. It’s the aesthetic previsualisation where we can start to become lazy. Because I know the route so well that we take the photographers on I often fall into the trap of looking for predetermined images. This is a problem as it means that I am inadvertently closing myself off to new images, for the spur of the moment. I would love to point to an image from this trip that is a good example of having just broken the norm, but I can’t. The realization was while looking at the photographers work last night before dinner. As is usual we each present a few of the images from the weekend. The quality of the work was very high, such that a number of the images were the sort that one feels the inner photo gremlin grumbling, ‘wish I taken that’. Then there were two of Martijn’s images that made me sit up and go, “wow, why didn’t I see that” (he does admit that the cloud shot was pre-meditated, but the point is that fresh eyes look differently at the scene). I didn’t even notice the horses on the ridge line as we walked from the top of the Tugela Falls back to the ladder. I didn’t notice because I was pre-occupied with other images that I had already captured, or that I was still thinking about.

As fresh travelers photographers are definitely more open to image suggestions. They see things with a new eye. They see things like a child would occasionally, with wonder. When we grow up we become jaded and cynical and stop looking at the world with the questioning gaze of the youth. In the same way that we stop looking at the world on our way to work, we stop looking for new things when we return to a scene regularly. This is ironic as looking at things in new ways is something that I, and many other photographers strive to do. So I leant a valuable lesson. Although I am relatively happy with some of the images that I created, there isn’t anything particularly new about them. I’ll be putting more energy in future into doing as preach…looking at the world like a ten year-old, or a traveler in a new land. Hopefully I start seeing again.
Posted by Emil von Maltitz at 2:21 PM