I love summer. Not for the heat, or trips to the beach or anything conventional. No, summer is the time for increased insect activity. Some people at this point would shake their heads while muttering "weird" under their breath. Ah, but for the macro photographer at large this is the time to delve into the plants and look for the little wildlife. 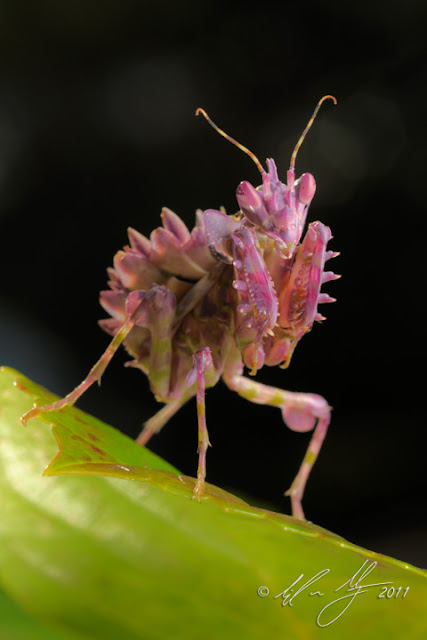 Here are two recent mini safaris that I've had searching for possibly my favourite 'subject' - Mantids. The first was actually a request to photograph a Flower-eyed Mantid in the garden of an apartment block on Durban's Berea. The second was a chance find in our garden.

I've mentioned before that a good way to approach macro photography of insects is to approach it as if you were thinking of doing a portrait shoot in a studio. Due to the low-light nature of macro photography in the wild it is usually essential that artificial light has to be used. In both instances I used a similar setup of a flash in a softbox (home-made) and a second flash unmodified. Although I was using Nikon's Creative Lighting System (CLS), it was purely for triggering purposes as I worked out the flash exposure manually. The softbox light was used as the key light while the second smaller flash was toned down somewhat and used as fill for the leaf and rim light for the Mantid. Bumping up the ISO a touch enabled a little bit of light to filter in from the background so that it wasn't pure black. Even so, considering the shadows and late afternoon light of the second mantid, it's still pretty dark. 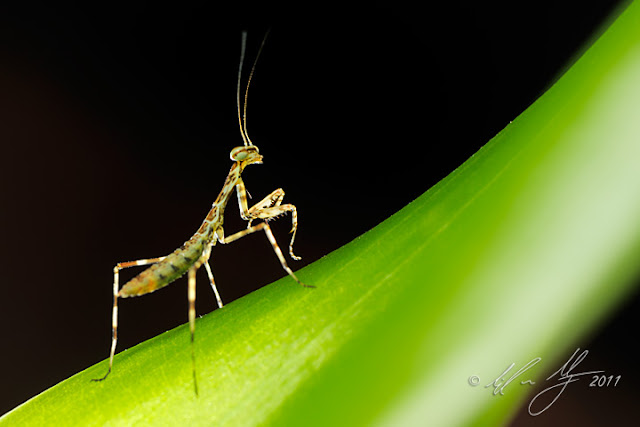 It's probably noticeable the difference in depth of field between the two insects as well. The first has considerably more as the pink Flower-eyed  Mantid itself was far larger than the second nymph (I'm not sure of the exact species). As a rough estimate once one gets to life-size magnification the depth of field is almost equivalent to the aperture in fractions of a millimeter (so f16 = 0.16mm DoF). 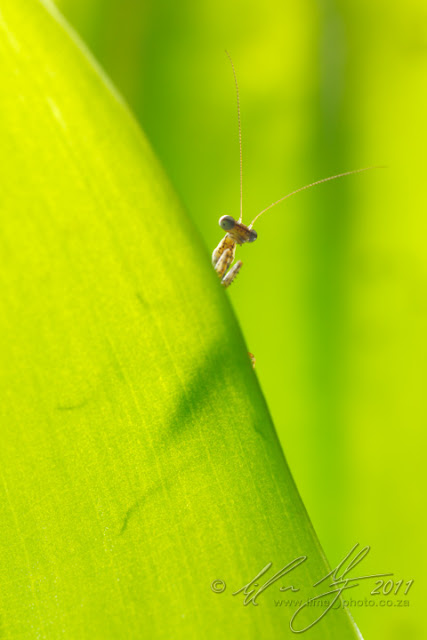 If a black background isn't desired it's easy enough to manoeuvre such that there is a background behind the insect that is close enough that the flash's output can light it. Shooting through a leaf also lights up the leaf, creating a great background glow. 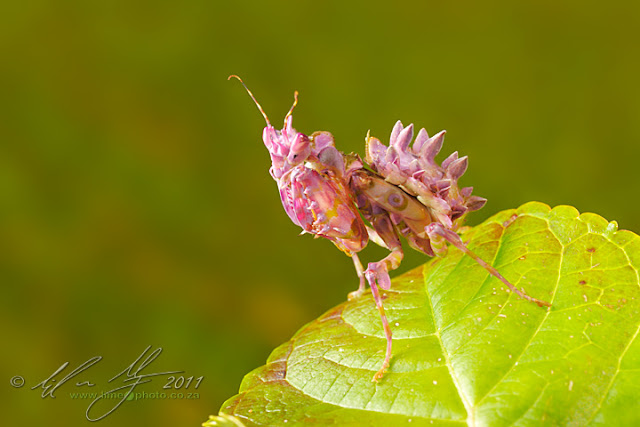 If I have to shoose essential equipment, two flashguns would be it. although a single flashgun mounted in a softbox can create wonderful wrap-like lighting, two flashes open up a world of macro lighting possibilities. You can get more information on lighting setups for macro from my tutorial on the website.
Posted by Emil von Maltitz at 10:19 AM