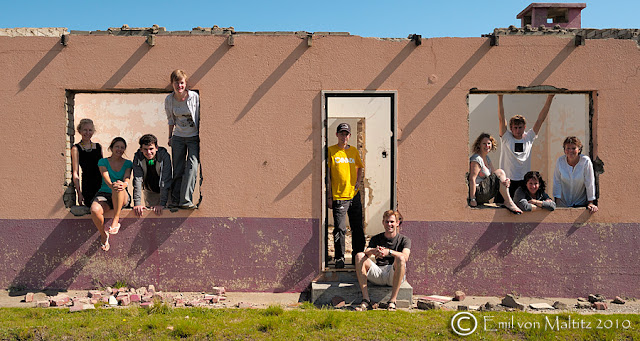 A rousing chorus that emerged almost every time somebody raised the camera to their eye. "Check that histo!" would be yelled with enthusiasm by all. Chimping aside, there was plenty to photograph over this last weekend's photography workshop where I was joined by what became affectionately known as the 'poo crew'.


The weather continually hovered around the threshold between great photography and miserable photographers. In a sense the blog post should be: 'Get out, regardless of the weather!', but more on that in a moment. 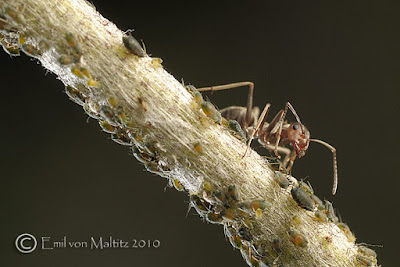 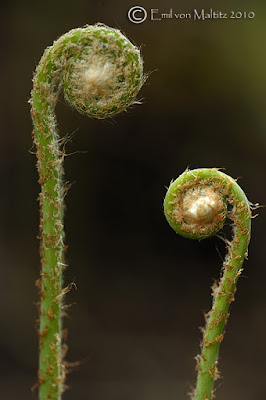 I harp on this regularly, and this month is no different. Taking a macro lens along on what is essentially a landscape photography workshop is always a good idea. On our first day at the beatiful Cascades waterfalls in the Drakensberg's Royal Natal National Park, I came across a stalk of grass covered in aphids and diligently watched over by a number of small burgundy coloured ants. While the students were hopping about on rocks and capturing the waterfalls themselves I concentrated on lighting the ants. This was done using my favourite method of a large softbox (large in relation to the ants that is) providing the primary light source from camera right. A second undiffused flash was placed in the same position as the sun was lighting the ants - camera left and behind the subject. the reasoning here was to obtain natural looking light, so by essentially replacing the sun's light with flash light I had fuller control of things like aperture and shutter speed (using only sunlight and the softbox would have either forced a larger aperture or alternatively overpowered the back-lighting that the sun was providing). An ISO of 400 also ensured that there was colour in the background rather than a pure black tone. 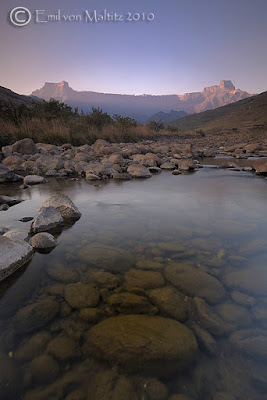 The second day was sweltering after the initial sunrise shoot towards the Amphitheatre wall. The usual golden glow didn't really appear this time as there was a bank of clouds in the distance that only allowed the sunlight to filter through once it was high enough to have lost that lovely red glow. I also made the mistake of concentrating on the Amphitheatre rather than looking around. Next thing I take a glance, and wouldn't you know it, the light was perfect on a different peak. doh. A quick gallop through bracken and thorny scrub was sadly in vain for a bunch of us who charged up a small hill to try and get the last bit of golden goodness on the sandstone cliffs. Ce la vie.

As I mention earlier: 'Get out, regardless of the weather!' Sunday morning was an obscenely early start of 3:30am. To make it worse we were sitting in a damp cloud with rain pattering on us enough to soak to the bone. A couple of mutters and someone saying "you don't seriously expect to go out in this", had some of the students feeling a little less than happy about tackling the hike in the early morning. Tackle we did though. Then suddenly at 5:00 am the sun popped out of hiding and we found ourselves standing just above the clouds looking out at a golden rimmed dawn. As Jodie, one of the photographers said, "it looks like Care Bear land!". Bad weather makes for great photographs. this might not always be the case admittedly, but the chances improve dramatically that the images that are captured are different enough to be special. When every bone in your body says, "stay in bed" - that's when you head to where you think the light might be when the weather changes. 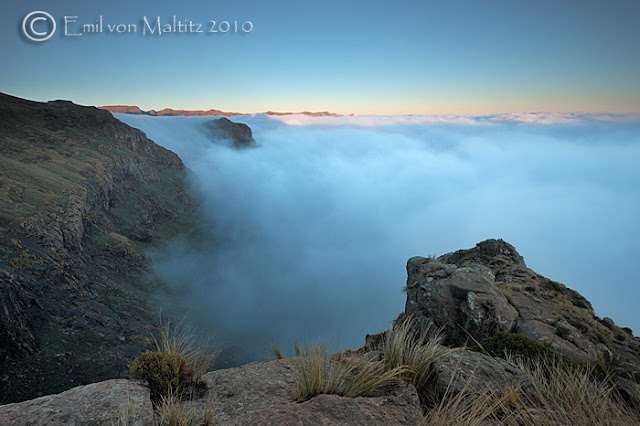 Ultimately the trip to the escarpment was one of the finest I've had with us standing both above a carpet of clouds as well as the cloud clearing enough to see the Tugela Valley far below. A truly special day.

Oh, and of course. Nice Histo!