Winter in the Drakensberg means for dry grass slopes and plenty of smoke in the air. As a necessary conservation measure the National Parks Board has a routine burning pattern that seems to cycle through every two years and in some places every year. Of course dry grass also means there are plenty of natural fires. Add this to the vast areas that get burnt on a seasonal basis by both small and large scale commercial farmers and you have the recipe for a murky skyline of bluish haze. The peaks appear as ghostly outlines rather than the craggy and majestic monoliths that one is used to.

August’s Photography workshop had us peering through the haze into the distance. In the early morning while sitting waiting for the sun to cast its magical glow on the Amphitheatre (for a few brief moments the face of the Amphitheatre glows a bloody red) a plume of brownish smoke drifted out of the valley west of the Devil’s tooth. On sitting watching the stars come out from the ridge alongside Witsieshoek the glow of a large fire on the escarpment made the mountain appear suddenly as if it were a volcano, or setting for some mythical folklore and perhaps a quest to destroy a valuable ring. 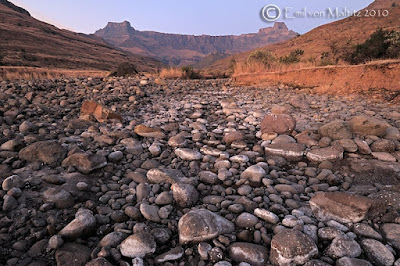 Of course this left me praying for a bit of wind to blow away some of the smoke for our trek to the chainladder and the escarpment. Apparently somebody listened as the wind buffeted the vehicle as we climbed the dirt road to Sentinel carpark in the early hours of the morning on the second to last day of the workshop. Great gusts of cold dry air bashed us off the path occasionally as we walked, and through the dim beam of LED headlamps we could make out violently tossing grasses on the slopes.
A spectacular sunrise greeted us from the lofty perch that the Witches affords. The sky lit up like a pyrotechnic show with oranges and reds that were opulent in their hues. The mountain itself glowed a colour that I’m not all that used to. It was really as if the sky were on fire. Sadly tripods were a little late to the scene to catch the first burst of red, but they were soon up and cameras were capturing the sun and its rays as it crested over the smoky horizon. 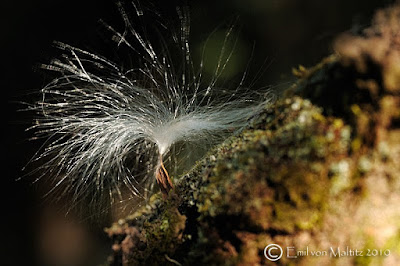 Now, the horizon may have been smoky, but the mountains were as clean and crisp as if they had just been formed. The howling wind had completely scrubbed the air of smoke and haze against the flanks of the escarpment. Unfortunately the clean air also meant for wind that imagined it were in a rugby scrimmage the way it pushed and pulled us from side to side on the path. Nearing the Neck on Sentinel’s north side the wind was fierce enough to blow a person off their feet. At one point my glasses were smashed from my face and a it was only with some luck that I found them by their glint in the light some 15 metres away (thankfully they didn’t fly over the edge). Forcing one’s way around the Neck necessitated the occasional prone posture as the wind whistled overhead, whipping clothes and straps against wind chapped cheeks. 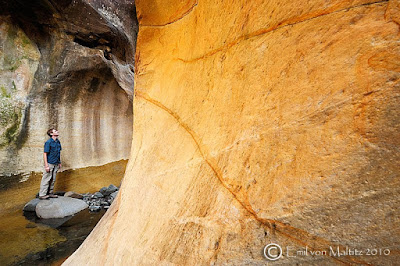 Ultimately the mountain won and we turned around at the Neck rather than test fate and press on. A leisurely exploration of the Witches was ample recompense though. On returning to Witsieshoek it was natural to discover that all the electricity was out due to the gale force winds. The wonderful people at Witsieshoek
Posted by Emil von Maltitz at 2:22 PM