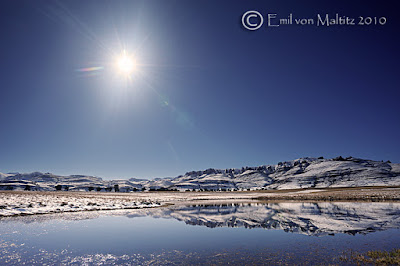 It snowed. Tons of the fluffy white stuff landed on the Witteberge mountains. Sadly it dusted, or rather completely whitened, the landscape a good few days prior to the winter mountain photography workshop near Barkly East in the charming Millard Lodge. A few of the peaks still held their scattering of snow, beautifully highlighting the mountain tops at dusk, but the primary load was already soaking into the ground by the time the photographers had arrived and unpacked their gear (some of us did manage to see a fair amount on Barkly Pass though).

The winter mountain photography workshop, an inaugural workshop organised by the highly professional Wild Mountain Adventures, was meant to be as intense a workshop as can be found. This it most certainly was as we braved the icy chills of the Witteberg 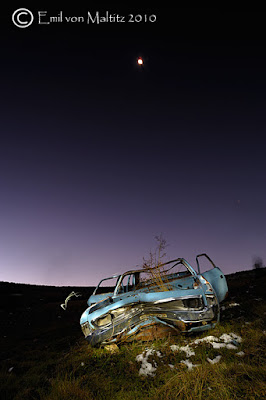 e in order to be in place for the rising sun each day. This meant predawn wake-ups followed by curses as warm bodies felt the below zero air (Friday, minus 10 Centigrade, Saturday minus 3 and Sunday minus 5). Friday morning was so cold that the diesel in our car froze! Numerous locations allowed for some great photo ops around the mountainous valleys of the Witteberge, for as long as we could manage the icy conditions. It was with some surprise that we noticed that small puddles froze solid during the course of our star trail shoot on Sunday night.
Icy shoots were mixed with post-processing sessions where limbs could thaw as images were imported and tweaked for the photo crit sessions. Some wonderful images came out of the shoots, with just about everyone walking away with some quality imagery.
A quick word on some of the locations: At the top of Lundean’s Nek on the old Transkei border, a wrecked blue Valiant became a fantastic subject for a painting with light tutorial. The thawed snow had soaked into the ground to make the small hollow where the car-cass lay an icy bog. Tripods shifted gently in the mud as we pranced around the old hulk with bright LED headlamps. Eventually the cold and wet drove us back into warm cars and the drive to a piping hot supper at Millard Lodge.
The early morning rise that found us wat 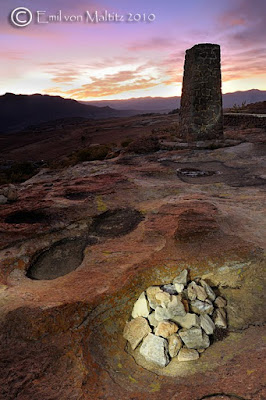 ching the sun rise and light up the flanks of a mountain above Glengyle Farm tested therigidity of all the tripods present. Gusting wind cut through multiple layers of clothing and shook the aluminium legs that supported the cameras. Miraculously a large number of the 2-10 second exposures came out crisp and sharp. The stone monument to the generations of Glengyle farmers that lay around the sandstone outcrop created a fascinating landscape study for the lenses that were trained on it. The image here used a combination of long exposure, neutral density grads and a burst of LED headlight to paint in the rock 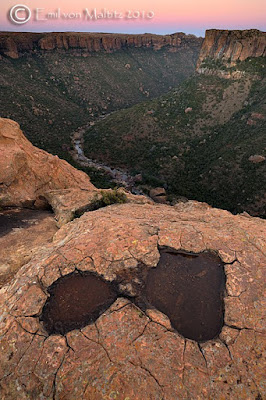 s in the foreground.
The astounding view of the Karringmelkspruit gorge (a secret location so if you want to take a look at this beauty you’ll have to contact Kate at Wild Mountain Adventures) meant for yet another early morning rise in the frigid cold so as to complete a 1 hour drive in order to get into position in time. Golden light striking the orange and yellow sandstone gorge makes it all worth it though.

Many thanks for a great weekend workshop to Julie, Heleen, Kobus, Kenji and Mike. 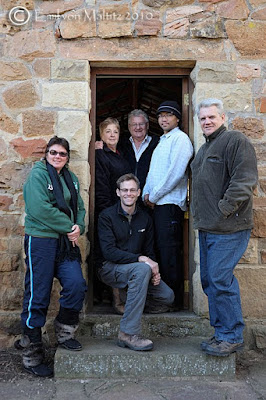