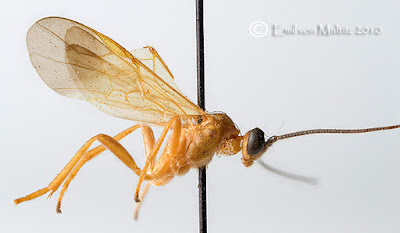 During the course of the week I was asked to photograph a specimen of a tiny wasp at the research unit of the Natural History Museum of Durban. A researcher needed an accurate image in order to study the shape of some veins in the wing. Due to the fragility of the specimen (it was collected in 1920!) the museum was understandably a little less than eager to trust the little guy to vagaries of the postal system.

Enter moi. I was asked to come in and photograph the the desiccated chap so that there would be sufficient magnification to see the wing veins and at the same time have sufficient depth of field to look at the general shape, colouration and attributes of the insect. When I received a basic jpeg of the guy I thought, no problem. Macro lens, extension tubes and a nice low aperture should be fine. Then I was introduced to the model.

Tiny was what I thought I'd have to photograph...minuscule hadn't entered into my thoughts. Typical...I'd left my bellows behind thinking that just over life-size would suffice. In the end I found myself duct-taping a reversed 50mm lens to the end of a 68mm stack of extension tubes (yes, the bellows would have been better). Light was provided by my usual softbox approach (see link). In the end I had a magnification of roughly 4-5X lifesize. The problem, however, was not the magnification but the depth of field. In order to keep the image sharp I opted to shoot at the optimal aperture for the particular lens which I have found through trial and error to be f11. But, at this aperture I only get about 1.1mm depth of field at life-size reproduction.

To increase the overall depth of field I ended up utilizing a technique called focus stacking. Take multiple images of the subject at tiny increments of focus (easy with a focusing rack) so that over about 10 images you have just about every part of the insect in focus. Stack the images together in photohop and using various layers, masks and techniques to spot the areas of focus, blend the lot together. Accurate colour was ensured by grey-carding a final exposure and applying that white balance to all the RAW images during conversion.

In hind-site I will remember the bellows next time :)
Posted by Emil von Maltitz at 8:32 AM