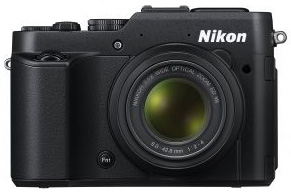 It's an ever-present sight wherever you find friends gathering, tourists flocking, parents doting, travelers exploring, narcissists 'selfing' (maybe I didn't need to add that) and any other kind of photographic record keeping taking place. It's the two arm stretch that makes people look like zombies with their arms guiding their direction. That or some kind of new-fangled camera yoga. Yup, it's the LCD stretch!

When digital reared its head camera manufacturers rapidly excised the optical viewfinder from the compact camera to save cost and space. At first users found this a bit confusing, but soon the loss of the viewfinder was hardly felt by the majority of camera users. All except enthusiast photographers. By this I mean the kind of photographer who is doing more than just photographing his or her mates having a beer, Aunt Nelly dozing at the beach, or a quick 'look at where we are' shot. It was bereaved by the SLR - soon to be DSLR - toting few. The few grew however and now there are suggestions by some internet writers that most middle class European and American families own at least one DSLR.

Despite the growing mass of enthusiast photographers, the manufacturers have resolutely avoided adding a viewfinder. In the end it's almost as if the manufacturers were surprised, no gobsamcked, when the Fujifilm X100 reached cult status practically within hours of it's announcement. Why? Because it has a viewfinder! A real viewfinder!

Holding a camera in front of you like it's a stinky nappy is far from being the best way to hold a camera. I tend to advocate the 3-point rule. i.e. there needs to be three points of contact between you and the camera, to whit: right hand on the shutter button with fingers positioned over major controls, left hand supporting camera and lens (elbow tucked or jammed into your stomach for added support) and the viewfinder welded to your face as a third brace point. I also like the technique that Joe McNally teaches where lefties (left eyed photogs) can brace the camera base on their left shoulder and can use both hands on the side of the grip - believe me it works. The point is that compact cameras sans viewfinders lend themselves towards shaky images, not to mention looking like an idiot.

Enter a new (ahem, maybe 'old' is more accurate) breed of camera...at last. In the last two weeks we have had the Nikon P7800 and the Leica C (type 112) cameras announced. Both sport electronic viewfinders with 100% frame coverage. Hallelujah! My only bugbear with this is that it's too late. Cellphone cameras have become ubiquitous. The iPhone 5S has just been announced and it's fairly obvious that photographers (family and enthusiast) were in mind with it's design what with the physically larger sensor. Admittedly the Leica is a re-badged Panasonic DMC-LF1 (the current fad of blinging out a cheaper camera and selling it at a premium - at least done more tastefully by Leica than Hasselblad). The viewfinder is blissfully welcomed, but why should I buy these instead of a phone (I'm not being entirely serious here, but some people are actually thinking this)?

The Nikon P7800, which incidentally I feel is the best P series Nikon to date, has to compete against the likes of the Canon G1x and the Sony RX100ii. Both of the latter sport larger sensors. Cellphones and their rapidly improving imaging abilities have meant that enthusiast photography (and that is who is likely to buy the P7800) has moved on. Why buy a premium compact when a Nokia or an iPhone can do almost the same? So yes, the new Nikon has a viewfinder which sets it not only apart, but in a handling league of it's own. But, why oh why, couldn't the sensor be a touch larger. The cynic in me realizes that we will no doubt be seeing a Nikon A with electronic viewfinder in the near-ish future (you have to space them apart enough to bleed some money after all).

I recognise that not everybody needs or even wants a viewfinder on their compacts. I've watched Joe Cornish work extraordinarily efficiently with a Sony RX100 as a 'compositional tool' whereby he finds the composition he wants with the camera held at arms length, and then sets up his DSLR or MF rig. Me, personally, I want a viewfinder, and I am not alone in this.

So I'm relieved to a see a trend starting where premium compacts will no doubt start including a worthwhile viewfinder (the peep-holes on the Canon G-series and earlier Nikon P series are absolutely useless). As Thom Hogan keeps reminding people on his site, camera design in the 80's wasn't broken. The manufacturers changed it and have forced people to accept compromises that quite frankly never needed to be made in the first place. Premium compacts like the Minox GL, The Rollei 35 and Nikon 35Ti all had useable viewfinders, were built like bricks (but still small) and often even had full manual controls. With camera manufacturers scrambling to differentiate their products from phones we may finally get back to having truly useable compacts....like we used to ;)
Posted by Emil von Maltitz at 3:48 PM